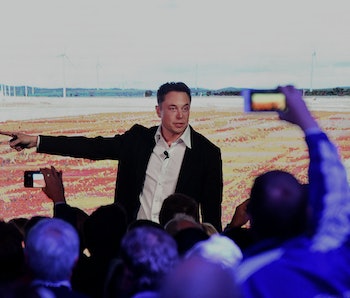 Elon Musk held an AMA on Reddit on Monday to discuss his BFR, Space X, and apparently, whiskey.

The wide-ranging discussion yielded some interesting comments from Musk. Here are seven.

6. Where will the ship, named Heart of Gold, land on Mars? Musk is considering a few factors:

Musk has a few factors in mind when it comes to landing the ship that will be launched into space on top of the BFR rocket. It should be somewhere near ice, which will be used to produce fuel for Heart of Gold’s return trip. It shouldn’t be in an area with giant boulders, which wouldn’t be suitable for a landing. It should be close to the equator, so people on board wouldn’t be “freezing [their asses] off.”

Musk didn’t offer any more explanation than just a simple “yes” in affirmation that he wanted more satellites orbiting the planet before launching people to Mars, so presumably the people who would live in a Mars settlement like the one below would have plenty of options for communicating with Earth via orbiting satellites.

4. Design for the propellant depot is “pretty far along.”

This process of mining methane gas to propel a ship on its return journey is called in-situ-resource utilization. Musk said that SpaceX’s system, which would refuel Heart of Gold, is “pretty far along” because it’s integral for the rocket’s journey.

3. BFR design has been modified to allow for higher payload mass (more passengers) on Earth-to-Earth trips

Since Musk revealed a bunch of new information about the BFR at the International Astronautical Congress in September, some changes have already been made to the rocket’s design. A third center engine was added to reduce the risk of catastrophe in the case of engine failure. If an engine goes out, now only a third of the BFR’s power is lost. This addition also allows for the BFR to carry in point-to-point Earth journeys a “higher payload mass” — that is, more room for cargo and passengers on board.

In responding to questions about his plans to send humans to Mars, Musk compared his Interplanetary Transport System to a “transcontinental highway” that would easily shepherd people back and forth to the red planet. With this basic infrastructure built, Musk said, it would be up to others to provide resources and machinery for the industry.

Musk says that the BFR’s 31 Raptor engines and increased precautions should make it safer than taking a regular commercial flight in traveling both to Mars and in fast point-to-point trips on Earth. Why do all this? So your ticket won’t have to say, “but also, you might die.” Thanks Elon.