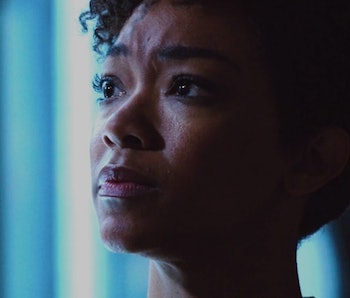 Who cares if Star Trek: Discovery is changing the entire canon of what came before it. Michael Burnham had Alice in Wonderland read to her as a child — with Spock— and Star Trek is doing actual, honest-to-goodness science fiction again.

Spoilers ahead for Star Trek: Discovery’s third episode, “Context is For Kings.”

If anyone was worried that the first two episodes of Star Trek: Discovery set the entire narrative of the series to be only a giant space war show, the third episode quickly usurped that assumption. Lt. Saru called Michael Burnham the “smartest officer in Starfleet” and Discovery is shaping up to be the smartest science fiction show on television at the moment.

This shouldn’t be a surprise since Star Trek helped mainstream real science fiction back in 1966, but it is refreshing. All too often, Star Trek shows or movies have felt more like good versions of themselves instead of compelling science fiction. But, the latest Trek doesn’t seem to care if old school fans love it or if a casual viewer understands it. What we’re seeing is an intelligent science fiction show that makes something like Westworld feel like baby talk.

The primary reason Star Trek: Discovery’s latest episode was so cool is probably because it was so different than its two-part premiere. On a basic narrative level, this show is surprising and a little disquieting. Yes, big fans probably already knew Burnham would join the crew of Discovery, but the way it all played out wasn’t remotely predictable. Discovery isn’t reinventing the wheel in terms of what makes good episodic TV interesting, at least not structurally. Like many good shows, we’re dealing with several ongoing mysteries. Does Captain Lorca’s secret lab make him a bad guy? How will Starfleet make peace with the Klingons? What’s up with that tribble?

None of these reasons were why the latest episode of Discovery — “Context is For Kings” — was so good. Instead, it was all about some crazy space fungus that could become an instantaneous interdimensional doorway to the entire universe and explain the entire nature of the cosmos at the same time. The USS Discovery isn’t just a new Starfleet ship, it’s testing experimental technology which somehow combines biology with physics. Lt. Stamets, the resident astro-mycologist (that’s a space fungus expert) impatiently explains to Burnham that “at a quantum level” there is no difference between physics and biology. He also mentions panspermia, the theory that organic life is spread throughout all of space via asteroids, meteorites or comets; basically, that the building blocks of life, could eventually prove to be extraterrestrial, that all of us, do in fact come from outer space. In a roundabout way, Stamets talking about panspermia honors an episode from The Next Generation called “The Chase” in which everyone learns that yes, humans, Klingons, Romulans and just about every other species in Trek was seeded by another, older humanoid race. Are these spores connected to that? Probably not, but it’s a pretty nifty way to connect a science concept to an older Star Trek concept.

This isn’t to say that Star Trek: Discovery is doing hard science fiction by any stretch of the imagination. The ins and outs of how a spaceship could use intergalactic spores to instantaneously appear and disappear is pretty far out. But, that’s what fun science fiction should be: highly speculative, but at least based upon real things. Plus, this technobabble seems less generic and more thoughtful than the mountains of fake science that pervaded much of The Next Generation era and beyond. For now, it seems like Discovery is trying to make sci-fi concepts the real driving force of the show. Which, at this point might be a tiny bit literal, since this new space fungus thing could literally drive the spaceship.

What made “Context is For Kings” feel like both good science fiction and good Star Trek was the running thread of Burnham talking about Alice In Wonderland. In Lewis Carroll’s famous children’s book, an underground tunnel led Alice to another world. This can be taken literally as Burnham navigates a small Jefferies Tube on the USS Glenn and starships navigate tunnels through space. But, the Lewis Carroll stuff also had a great thematic ring to it.

In the penultimate scene, Burnham tells Cadet Tilly that this is the book that taught her not to only rely on logic, that sometimes “up was down.” Heartwarmingly, she reflects that this book was read to her by her foster mother on Vulcan, who we know is Spock’s mom, Amanda. In Star Trek VI Spock said “logic is the beginning of wisdom, not the end,” and it looks like Discovery is hell-bent on proving that good science fiction can be the beginning of compelling TV drama, but it doesn’t have to be everything. Context matters.

Read next: Why the Uniforms Look Different on Star Trek: Discovery

If you liked this article, check out this video on Inverse’s review of Star Trek Discovery.

More like this
Culture
Jan. 18, 2023
Your science fiction education begins with Babylon 5
By Ryan Britt
Entertainment
20 hours ago
Final Star Trek: Picard Season 3 trailer adds two surprising characters
By Ryan Britt
Science
Jan. 21, 2023
A deadly fungal plague swept the world of The Last of Us — is it realistic?
By Tara Yarlagadda
LEARN SOMETHING NEW EVERY DAY.
Related Tags
Share: