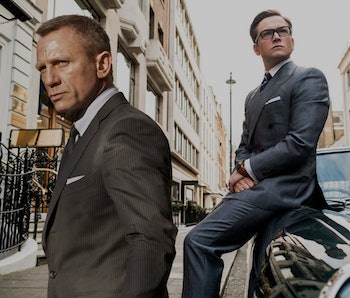 The budding Kingsman cinematic universe began as a gloriously over-the-top James Bond parody, but there’s one huge difference in new The Golden Circle sequel that makes Kingsman better than your typical 007 tale: These British super-spies genuinely make an attempt at romantic love.

When you think of the quintessential James Bond “romance,” it’s usually physical and involves multiple sexual partners in a single film before Bond “falls for” the good one. After he beats the bad guys, they roll around in bed or ride away in a car. Bond Girls are almost never real relationships with two exceptions:

In 1969’s on her majesty’s secret service, Bond actually got married, though Tracy Bond (played by Game of Thrones star Diana Rigg was tragically killed off at the end of the film. More recently, Vesper Lynd (Eva Green) leaves an impact on Bond in Casino Royale before her murder in Quantum of Solace, which drives him mad.

Kingsman: The Golden Circle does the unthinkable, however, by having Eggsy follow through and demonstrate emotional commitment with his romantic partners. At the start of the movie, we find out that Eggsy’s in a serious relationship with Tilde. They live in Harry’s old flat. He meets her parents. She buys him a new dog. They get bloody married at the end of the movie. Welcome to 2017, when even our James Bond satires settle down.

Somehow, in a movie franchise where hundreds of heads once exploded to thunderous amounts of surrealistic fireworks, the most outlandish thing Kingsman did with its sequel was subvert our expectations in this way. You’d think Eggsy’s Kingsman would be more like James Bond, but instead, he’d rather settle down.

He’s only a little nervous about meeting her parents, a veritable king and queen. When he does, he has his fellow Kingsman Roxy chime brilliant things in his ear. He kills it. It’s charming:

It’s a shame that the further you get into The Golden Circle, the more things just sort of fall apart. After every Kingsman except Eggsy and Merlin are killed, along with Eggsy’s friend and dog, it forces a contrived and unnecessary situation that leads to the discovery of the American Statesman. Eggsy’s relationship falls to the background. It doesn’t resurface until Eggsy needs to sexually engage with a suspect — ridiculously planting a tracking device in her “mucous membrane” — so he FaceTimes Tilde to get permission. Spoiler: She reacts negatively, and rightfully so.

Eggsy bravely goes to third base with a beautiful woman for the sake of saving the world and jeopardizes his relationship in doing so. It’s as if Kingsman wants to be insane, hypersexualized, and sometimes gruesome but also to have a heart and soul. This kind of inherent contradiction bogs the movie down, making it much more frustrating to watch than its more straightforward, fun-loving, and ridiculous predecessor.

Because of these growing pains, it’s hard to really buy Eggsy’s earnestness when he goes into the final confrontation in the hopes of saving Tilde rather than boldly trying to save the whole world. We’re told that he loves her, but other than saying nice things and being a seemingly sweet, loving boyfriend in passing on occasion, he never really shows it in an honest way. The Golden Circle never really earns their romance, and it’s a shame, because it was a delightful surprise in the sequel that made it a Bond satire worth paying attention to.

Kingsman: The Golden Circle is out now in theaters. No third film has been officially announced, but director Matthew Vaughn has already expressed interest.