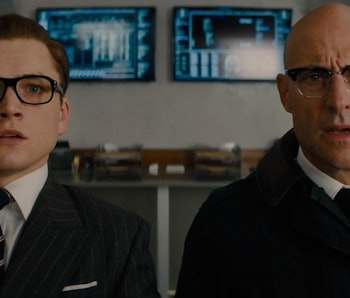 Hidden among the crazy, fun action sequences, cool gadgets, and Sir Elton John jokes of Kingsman: The Golden Circle is a truly shocking, heartbreaking moment. Fans of the first film, Kingsman: The Secret Service, might be surprised to learn that an important character is killed off within the first half hour of the movie’s sequel.

Convinced Kingsman is the only organization in the world that could possibly stop her, Julianne Moore’s Poppy moves to get rid of them. She kills every Kingsman agent, except Eggsy and tech man Merlin — including Sophie Cookson’s Roxy.

Roxy, who originally beat Eggsy out for the role of Lancelot in the first Kingsman, is depicted as Eggsy’s bomb-ass best friend for the first 30 minutes of the film, though she doesn’t get much actual screentime before biting it in a fiery explosion. Poppy sends a missile straight for the Kingsman mansion, and Roxy gets caught in the blaze and subsequent sinkhole.

And while Kingsman didn’t have a problem bringing Colin Firth’s Harry Hart back from the dead with wound-healing foam and nanites from the Statesman, it seems unlikely that Roxy’s needless death will be reversed if a third film makes it to the screen.

Somehow, a missile seems a little harder to recover from than a headshot.

Kingsman: The Golden Circle is now playing in theaters.