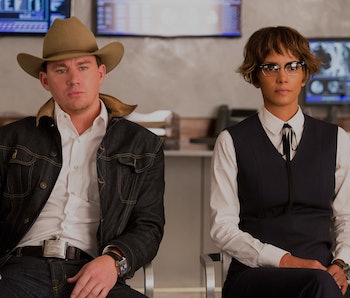 Eggsy’s second adventure in Kingsman: The Golden Circle left the world a drastically different place. Tons of people died, others came back to life, and somebody even got married. But where does that leave things for a potential sequel?

Spoilers follow for Kingsman: The Golden Circle, the fate of the world, and exactly what kind of liquor the new Kingsman cover business will distill.

Director Matthew Vaughn told Cinema Blend in September that the many surviving characters in the Kingsman universe would each go on a new “journey” in a potential third movie. He promised, “They’re definitely not going to be doing what you’ve seen them do before.” Vaughn has been vocal for some time about plans to turn Kingsman into a trilogy, but nothing firm has been announced so far.

Either way, here are the 5 important ways that Kingsman: The Golden Circle sets up a potential sequel:

1. The Kingsman and Statesman Become Brothers

At the start of The Golden Circle, the Kingsman and Statesman were distant cousins that didn’t even know each other existed. But, having worked closely together to save the world from Poppy Adams, their leader “Champagne” announces at the end of the film that they are now “brothers,” promising they’d pool their resources and work closely together in the future.

This union is symbolized by the Statesman procuring a Scotch distillery, therefore upgrading the Kingsman from mere tailors to distinguished men of liquor.

That means that even if the next Kingsman adventure is set back in the U.K., we can expect to see the Statesman team return for a second adventure. In fact, they’ll probably more or less be part of the same agency moving forward. This is good considering every single other Kingsman died in The Golden Circle.

Much like the troublesome Anakin Skywalker, Eggsy isn’t supposed to take any romantic companions as a Kingsman. But he ignores those rules and dates Princess Tilde throughout the sequel. They met at the end of the first movie after he rescued her from Richmond Valentine’s lair.

They’re living together at the start of The Golden Circle, and Eggsy even meets her parents, the king and queen of Sweden. They have their rough patch, especially when Eggsy has to get to third base with a target for work purposes. One of the film’s final scenes is their wedding. That could mean that Eggsy is off active duty going into the third movie and gets pulled back into the fray for one last adventure.

He also might just be the new Merlin or even Arthur. With the original Merlin and second Arthur now dead, it’s tough to say what the future of the Kingsman might look like — and what Harry’s role might be in it. He had issues with his memory and phantom butterflies, but seemed back in full fighting shape by the final confrontation. Will he be the new head of Kingsman or will he resume the role of Galahad?

With Pedro Pascal’s “Whiskey” ground into burger meat, it left a boozy vacancy in the Statesman lineup. Champ tried to get Harry or Eggsy to take his place, but with a nomination from Tequila, Ginger Ale finally achieved her dream of becoming an active field agent. It’s a big win for Halle Berry, who once played a Bond girl in Pierce Brosnan’s Die Another Day (2002) and now is Bond-like agent herself. But, with Merlin dead, who’s going to be the intelligence specialist?

Channing Tatum was bizarrely almost nonexistent in The Golden Circle, having spent most of the film cryogenically frozen.

But the ending teased him in a snazzy Kingsman suit walking the street outside the newly rebuilt Kingsman tailor in London. Does that mean he’s a Kingsman now? Or does it just mean that the new working relationship between the two agencies is even closer than we might have initially thought? Either way, it’s entirely possible that Tatum’s character could take center stage in a third Kingsman movie should the film happen.

Kingsman: The Golden Circle is currently in theaters, with no confirmed plans announced for the third film in the franchise.