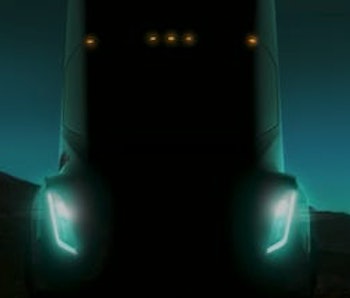 Tesla will unveil its semi truck to the world on October 26. In classic fashion, CEO [Elon Musk] has (https://www.inverse.com/topic/elon-musk) been bullish on the prospects of an all-electric semi truck, describing the vehicle as “unreal.”

Concrete details details about the vehicle are scarce, but this far out from launch, that tends to be par for the course. But it’s possible to sift through what little Musk has said and the history of Tesla car rollouts to get some sense of what what’s in store on October 26.

“A lot of people don’t think you can do a heavy-duty, long-range truck that’s electric, but we are confident that this can be done,” Musk told shareholders at the company’s annual meeting in June. The hope then would be that the launch will offer some proof that the truck can manage long-range drives of 1,000 miles or more.

Not everyone is so sure how feasible that is. Two researchers from Carnegie Mellon University described the challenge as “on par in difficulty level with electric airplanes,” claiming that the truck would be limited to a range of 300 miles.

That chimes with a Reuters report that claims Tesla is targeting between 200 and 300 miles. Considering how conventional diesel trucks can run as far as 1,000 miles, it seems to fall rather short of the “long-range” description.

Publicly, Musk has given little else away about the truck itself. What we do know is that it will use a lot of Model 3 components and motors, and Musk told investors at the June meeting that early prototypes handle “like a sports car.”

It’s also designed with autonomy in mind — Musk explained at the TED 2017 conference that he saw truck drivers transitioning to “fleet managers” that oversee an array of vehicles, all driving around with the aid of an onboard computer:

We don’t know much more than that, but this lack of information is not unexpected. In fact, reviewing the history of past Tesla vehicle rollouts might help point to what the semi truck’s near-term future looks like. The short answer is don’t expect a fleet of them to hit the road anytime soon.

Before the Tesla Model S was unveiled in June 2008, speculation was rife. Tesla mentioned an all-electric sedan and an entry-level vehicle, which turned out to be the Model S and Model 3, in its 2006 master plan for the company.

Prior to the big announcement, the Model S was known by the codename “White Star.” Blogs referred to the all-electric design, four-door layout, and a price tag of somewhere around $50,000 to $70,000.

Tech blogs were clamoring for more information about “White Star”, but details were thin. The company’s only other car, the Roadster, altered expectations about how an electric car should perform. Its sporty two-seater design turned heads, but its $108,000 price tag meant it was purely for the elite. That meant “White Star” could be the first to bring Tesla to a wider audience.

Most pre-launch tidbits were accurate, but one point that turned out false was that Tesla would launch a hybrid version of White Star with a secondary gasoline-powered engine. In November of that year, Musk confirmed that Tesla was an all-electric company. In 2012, four years later, the first Model S vehicles hit the road.

By a similar token, not much was known about the Tesla Model 3 prior to its March 2016 unveiling, except for the fact that it would start at $35,000.

Even after the design and general concept of the car was unveiled, it wasn’t until production actually started in June of this year that Musk finally filled in the missing details about optional extra costs and what exactly a $35,000 Tesla comes with. If you want a long-range battery, it turns out, you need to pay $44,000 for the higher-tier version.

Much like those cars in their initial stages, the Tesla Semi may remain more concept than anything else when it launches at the end of October. Musk plans to reach scale production on the semi truck in about two years, placing it on a similar timeline to the Model 3 that entered production two years after its initial launch.

So expect to see a full prototype vehicle, but don’t be surprised if some things change between now and 2019. At the same time, it’s a safe bet that the general selling points will make their way to the final vehicle.

If you liked this article, check out this video of a Tesla Model X predicting a car accident before it even happens.