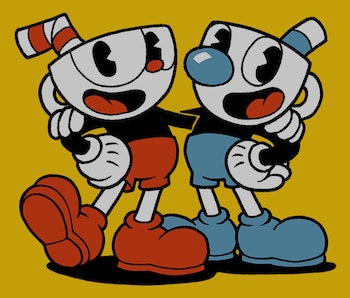 It isn’t an exaggeration to say there is no video game quite like Cuphead. Available now on the Xbox One, Cuphead trades the beeps and bloops of most retro-style games for retro piano jazz of the Prohibition era. A two-hit combo of wildly divergent things — ‘90s-era Super Nintendo, ‘30s-era Walt Disney — Cuphead manifests into something totally unique and totally fun to play. But the way the visuals of the game were created required reaching back into a style of animation which has nearly been forgotten.

Created by brothers Chad and Jared Moldenhauer of Studio MDHR, a small Canadian team whose employees worked remotely all throughout production, Cuphead was made using very, very old school animation techniques that have been pretty much extinct since before the Second World War. Mainly, its animation was drawn “on the ones,” says inker/producer Maja Moldenhauer. Here’s what that means.

In cartoons, there are 24 single frames for every second of screentime. In the ‘30s, artists drew every frame of the 24 until studios halved it to save time and money. Hence “on the ones.”

“Studios realized they could be animating on the twos and get away with it,” explains Moldenhauer. “That basically means [drawing] 12 frames per second, and it still looks fluid. We animated on the ones, and it’s really, really fluid. It contributed to gameplay and precision, which was just as important.”

Unlike most new video games, Cuphead’s 120,000-plus total frames were “one hundred percent” hand-drawn, making it one of the only new video games conceived with ink and paper. “Everything is digital now, but we wanted to be authentic to the style of the 1930s,” Moldenhauer tells Inverse. “You couldn’t capture the style digitally: The way your pen tapers, the way your weight shifts throughout the lines to capture the variance between the thin and thick. We had to use pencil and paper. It is a dying art form.”

The Moldenhauers found just five artists in North America who still know how to animate with pencil and paper to work on the game. “We spent countless months studying these works from the ‘30s,” she said, who added that everyone is self-taught in this style. (Practically speaking, no one from the era could teach them.)

“We attribute Amazon for all the books we’ve ordered. And YouTube. We’re watching and rewatching the cartoons,” says Moldenhauer.

The studio specifically watched Betty Boop, Silly Symphony, Popeye, anything Disney circa Steamboat Willie, as well as the legendary 1930 short Swing You Sinners! by Fleischer Studios for inspiration. “We’re not classically trained. It’s just self-taught, and being in love with it and wanting it so badly we put in the hundred hours a week.”

Obviously, computers were still important to make the game, but the amount of analog to Cuphead’s digital DNA is unheard of today. The self-admitted perfectionism of Studio MDHR has paid off in a way that almost makes the game’s long delay — Cuphead was initially scheduled to release in 2016 — worth it.

“It was a difficult decision [to delay the game] in that we felt bad for people who were looking forward to it,” Moldenhauer says. But it wasn’t a hard decision either. “A bad game is bad forever, a delay is temporary.”

Behind the scenes of most indie games, you’ll find stories of cash-strapped go-getters who made their hits on their laptops and home computers. That’s still the origin story of Cuphead, for the most part, which started as a passion project that evolved into a full-time job when Microsoft scooped it as a console exclusive. The only difference between Cuphead and every other game was that its creators didn’t think anyone else would play it.

“We didn’t think there was an appetite for this,” she says. “We didn’t go all in until we saw the attention from E3 and thought, ‘Okay, maybe someone would play this game.’”

Fusing the two things that the Moldenhauers loved, cartoons and video games, also helped solve an identity problem: How do you make a retro-style game stick out? Today’s indie hits like Hotline Miami and Shovel Knight have conquered the gen-X nostalgia space, making ‘80s aesthetics old hat. so the Cuphead team decided to go back further in time. “What stuck at the end of the day, we decided, ‘What are we really going to love doing?’ We love cartoons from the ‘30s. So we thought, let’s bring it back.”

As it turns out, vintage cartoons go hand in hand with ‘80s game design. “We knew we wanted a game focused on bosses,” says Moldenhauer, citing Mega Man specifically. “When you’re working on a boss, you have to create character to make them come to life.” The team adopted an old cartoon theory. “In the ‘30s they used something called ‘rubber hosing.’ Basically, there are no bones, no joints. You personify objects. You can get creepy. We loved that.”

While there are nods to the 21st century in Cuphead, such as upgradable health and frequent save points, Cuphead remains true to its retro roots: It’s brutally challenging. “That’s our intention,” boasts Moldenhauer, before adding: “It’s fair.”

“The learning curve is steep, but when you get it, you get it,” she adds. Moldenhauer reveals she’s seen a common scenario in Cuphead’s public pre-release demos: While players get frustrated by the frequent deaths, as soon as they discover the patterns, players keep coming back for more. “If people were running through levels on their first go, we didn’t fulfill what we set out to do.”

Animation thrives in 2017. Disney is still a juggernaut corporation, and cult TV shows like Rick and Morty and Voltron Legendary Defender captivate audiences of all ages. But even when those shows get weird, they’re still grounded in a human reality. But, cartoons from the 1930s almost never did. Combined with the equally weird platformers of the ‘80s and ‘90s, Cuphead allowed its team of working adults to let their freak flags fly.

Cuphead is out now for Xbox. One

Read Next: How the Music of Cuphead Recaptures a the 1930s