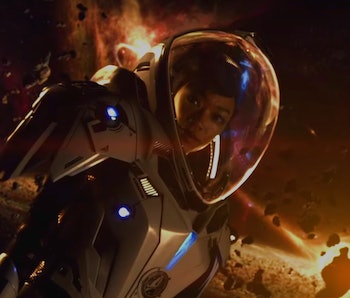 It looks like Star Trek: Discovery won’t just be good, but full of surprises, too. Despite fears that the review embargo was a troubling sign for the series, early social media reactions to Star Trek: Discovery’s premiere episodes have been totally positive.

On Tuesday, a special preview screening took place in Los Angeles for a handful of insiders, press, and plenty of Trek alumni. None in attendance have revealed any concrete spoilers, meaning the rest of the world will have to wait to find out if Michelle Yeoh’s Captain Georgiou makes it to the third episode alive. But, the spoiler-free reviews were overwhelmingly enthusiastic.

Carli Velocci, TV reporter for The Wrap, hinted that big things happen in the series premiere, but wanted to make one thing very clear: “OK just got out of #StarTrekDiscovery and can’t say much but… It’s good. Really good.”

Roxann Dawson, who played the half-Klingon B’Elanna Torres on Star Trek: Voyager, was also impressed with the series.

Another former Trek actor, Nikki de Boer — Ezri Dax on Deep Space Nine — offered some reassurance to a fan, explaining that everything she saw sold her on the show.

She also agreed with Adam Nimoy, son of Spock actor Leonard Nimoy, that Star Trek: Discovery has a great cast and incredible visuals.

TrekMovie.com commented that the two-part premiere felt “truly cinematic and steeped in Trek lore,” and that there was “lots of action and backstory” and that some elements will “spark debate.”

Impressively, it didn’t look like anyone had anything bad to say about the premiere episodes of Star Trek: Discovery. For U.S. viewers, the series is eventually going to be completely exclusive to the new streaming service, CBS All-Access. And while that’s yet another subscription fee to have to pay, it doesn’t seem like Trekkies will regret taking the plunge.

Star Trek: Discovery premieres on Sunday, September 24. You can find out how to watch it here.

If you liked this article, check out this video on why Klingons look different in Star Trek: Discovery.