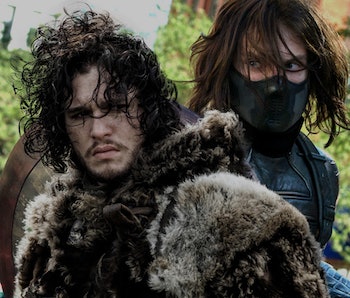 Winter has come to the Marvel Cinematic Universe in the form of Bucky Barnes, aka the Winter Soldier. Sebastian Stan, who has played Captain America’s pal since 2011’s Captain America: The First Avenger (and is contracted for NINE more Marvel movies) likens his character to Jon Snow, the icy former leader of the Night’s Watch and King in the North on Game of Thrones.

In an interview with MTV at the Toronto International Film Festival, Stan opened up about Avengers: Infinity War and how he feels like the Jon Snow of the MCU. Specifically, he feels like Snow during the Battle of the Bastards, when the secret Targaryen faced certain death from an oncoming stampede of loyal House Bolton knights.

“I feel a lot like that Jon Snow character,” Stan said. “You remember ‘Battle of the Bastards’? … For anyone who knows out there, when there’s that shot of Jon Snow, from the back as horses are charging at him and he’s just standing there, that’s kind of how I feel on set at times. Will I make this stampede or not?”

(I thought Stan was going to say it’s because they both have nice hair, TBH.)

Voluminous manes aside, it is interesting that Stan has looked to Jon Snow whilst filming Avengers: Infinity War. Especially with that “stampede” part — will Bucky Barnes also have to stand his ground against a horde of Thanos loyalists? Or is Stan overwhelmed at the massive scale that Infinity War has grown to? Maybe both?

Either way, when Stan was asked about whether or not Bucky will become the new Captain America, he deflected answering, saying “it’s just speculation.” Boy, Bucky really is like Jon Snow: They both know nothing.

Avengers: Infinity War will be released in theaters on May 4, 2018.