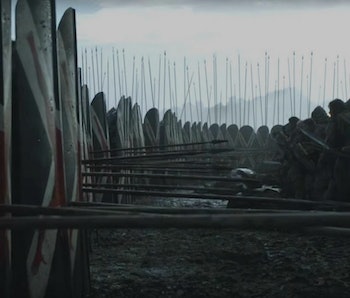 Last night’s episode of Game of Thrones delivered not one, but two large-scale conflicts. First was Daenerys Stormborn’s frankly overwhelming assault on the slavers attacking the free city of Meereen. The second was Jon Snow’s epic clash against Ramsay Bolton at Winterfell. A new video from Variety sits down with Game of Thrones’ Emmy Award winning special effects team, and how they wrangled all the big set pieces together in “Battle of the Bastards”.

The two battles from “Battle of the Bastards” were both jaw-dropping, but for different reasons. The battle of Mereen utilized the full power of three dragons to lay waste to a fully-manned warship. In Winterfell, two armies smashed into each other in ways that haven’t been seen on screen since maybe The Return of the King. So how did the special effects team put together two very different, but equally large-scale battles? A flamethrower, a couple hundred extras, a hydraulic dragon, and lots of green screen.

Special Effects Producers Steve Kullback and Joe Bauer explained some of the tricky bits that went into creating what is arguably the show’s biggest episode. First in Mereen, they broke down what goes into making sure the dragons move and function like the winged war machines they are. Apparently the scenes with Emilia Clarke’s Daenarys Stormborn riding a dragon over Meereen are some of the trickiest to film for the special effects team.

First there needs to be shots of Clarke riding a hydraulic dragon replica in front of a green screen. Then the whole things need to be recreated digitally as there is no Meereen, no dragons, and no warships in real life, yet all of those things were present in the show, layered on top of each other. A fun fact is that the fire breathed by the dragons is actually a practical effect, utilizing a massive flamethrower. The way the fire acts in real life goes a long way in helping recreate their destructive capabilities on something like a boat, or soon-to-be burned individuals.

Of course the battle at Winterfell utilizes even more of that studio wizardry. The large armies on both sides were apparently played by the same 200 or so extras who would change costumes, and be digitally replicated depending on where the filmmakers needed them. What’s probably most impressive about that battle was the tracking shot where Kit Harrington’s Jon Snow was alone in the thick of battle, dodging horses, soldiers, and arrows. That was also mostly digitally rendered, but the technical skill to make it look realistic when the action was happening so close to the screen is astounding.

You can see how all those scenes are broken down, along with some other effects in the video below.