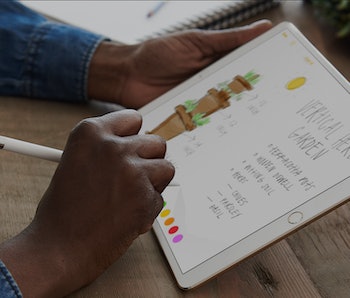 Apple is expected to launch the iPhone 8 in just a few days, and it could start a new era of design for the company. On Saturday, device leaker Benjamin Geskin shared a mockup of how some of the upcoming smartphone’s features could change the design of the iPad.

The iPhone 8, set to launch 10 years after Apple’s first smartphone hit stores, is shaping up to be one of the company’s largest releases ever. The phone is set to use a 5.8-inch OLED screen to offer higher image quality than its LCD counterpart, with a screen that stretches to the far edges. A face recognition scanner, dual lens rear camera and depth sensor will help boost augmented reality features and make fingerprint unlocking a thing of the past. Simply put, you’ll unlock your iPhone or iPad with your face.

Geskin’s mockup takes these features and applies them to the 10.5-inch iPad. Apple’s tablet device has incorporated several features that first debuted on the iPhone over the years, so it’s possible that features like face recognition and an OLED screen could also make the jump.

View the mockup below:

It may seem like a terrible idea, as the concept iPad lacks the bezel around the side that many use for gripping the larger device. But Apple has made similar adjustments to the iPad before, introducing a thinner bezel with the iPad Air and iPad Mini. In these instances, the company developed hidden accidental rejection software. The software, which has been used since 2012, can tell whether a user is resting their thumb on the screen or purposefully interacting with the display.

The face scanner is perhaps less certain. The feature has surfaced in leaked reports about Apple’s next iPhone, with rumors claiming the device can scan in face in a matter of milliseconds, but how well it works in practice remains to be seen. Apple recently brought fingerprint scanning to its MacBook Pro range, and it’s possible the company will continue to use finger scans on devices where space is less of an issue.

Apple is hosting its event on September 12 at the Steve Jobs Theater in Cupertino. Alongside the 5.8-inch device, it’s expected to unveil updated versions of the iPhone 7 and iPhone 7 Plus.

More like this
Innovation
8.9.2022 11:00 AM
This self-healing material could fix your dinged-up car in 30 minutes
By Molly Glick
Innovation
8.14.2022 10:00 PM
60 years ago, an iconoclast designer revealed a fix for our biggest tech problem
By Tim Gorichanaz and The Conversation
Innovation
8.17.2022 6:15 PM
Can we terraform Mars? Scientists may have made a major breakthrough
By Jeff Nagle
Related Tags
Share: