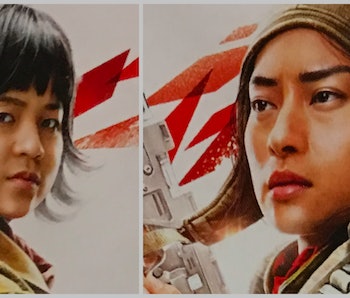 Figuring out the mystery of Rey’s family, or the secret origins of Supreme Leader Snoke might be the primary obsession of most Star Wars fans, but Force Friday has revealed that two new characters will be a big deal in The Last Jedi. And no, they’re not Porgs.

On Friday, Inverse hit up a Toys R Us at midnight for Force Friday and discovered that among the Reys, Poes, and Finns, there was a huge representation for newcomers Rose, and her sister, Paige. The action figure descriptions call Paige a “Resistance Gunner” and Rose a “Resistance Tech.” Rose and Paige are sisters and are played by Kelly Marie Tran and Veronica Ngo, respectively, in The Last Jedi.

Now, the existence of these two new Resistance characters isn’t exactly news. Fans have known for a while about Rose and her undercover mission with Finn. And there have been whisperings of her sister, too. But, what is news is what a huge deal both of these characters will be in The Last Jedi. The support Hasbro alone is throwing into these two is pretty impressive.

True, Star Wars has a wonky track record of releasing action figures for characters who don’t have a lot of screen time (cough cough, Constable Zuvio) but something about the prominence of Rose and Paige feels different. Even if Paige ends up having as much screen time as Wedge did in the original films, that’s enough to make her into a legit classic Star Wars character. And we already know Rose is set to have an adventure that is similar to that of Luke’s journey in A New Hope.

Beyond “gunning” and “teching”, the exact roles of Paige and Rose aren’t totally clear in the upcoming film. But if kids are being encouraged to play with the action figure versions of them this much, these sisters are bound to send at least a few tremors through the galaxy.

New Star Wars products for The Last Jedi are out today. Keep an eye on our Humans+ Instagram account for more updates.