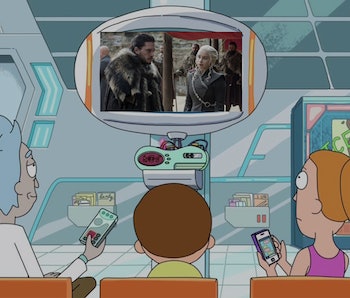 HBO’s Game of Thrones broke records for viewership throughout August 2017, but the second-most watched show on television (by a lot), Rick and Morty, has something that Game of Thrones never will. It’s not ice zombies, dragons, or time-traveling seers — it’s diversity in its writers’ room.

In Rick and Morty’s third season, the production team has reaped the benefits of a more diverse writers’ room with a 50/50 split between male and female voices. The writing thus far in Season 3 has reflected that growing diversity with smart stories that present the female characters as the central focus rather than the titular male leads.

Yes, most episodes are still about Rick and Morty, especially the most recent, which saw the pair go to an intergalactic spa that extracted toxic versions of themselves that became their own sentient beings.

But in the second episode of Season 3, Morty’s sister Summer takes center stage as the main character in a Mad Max-style apocalyptic wasteland. She takes control and becomes the queen while dealing with simmering resentments towards her parents for their separation.

Rick and Morty has always been a painfully self-aware show in which Rick often breaks the fourth wall, but the addition of female voices like that of Jessica Gao, Jane Becker, Erica Rosbe, and Sarah Carbiener allow Rick and Morty to be even more critical, especially when it comes to its portrayal of women.

Rick’s relationship with his daughter, Beth, is fleshed out in “Pickle Rick,” an episode about Rick becoming a murderous pickle but also one about his avoidance of psychological therapy. Even Morty’s long-time crush Jessica — usually a very minor character that is objectified — gets characterization in “Rest and Ricklaxation.”.

But over the course of seven seasons, HBO’s Game of Thrones has struggled in its depiction of female agency and never passed the Bechdel Test. And on a show that sometimes depicts incest and rape — or both at once — the need for more diverse voices in how the show handles such topics becomes even more dire.

Furthermore, some of the show’s most interesting characters get neglected for the sake of larger plots that almost always focus on Jon Snow and his mathematically perfect ass.

In Season 7, while Jon was off on exciting adventures North of the Wall and having sex with his aunt, he left his two “sisters” (actually cousins) back at Winterfell. There, they clashed in unsettling ways, giving viewers anxiety about how and why two of the show’s best characters were suddenly at each others’ throats.

Arya can probably kill almost anyone in Westeros if she wanted to. Why is she spending an entire season fighting her own sister?

Sure, the Season 7 finale got them back on the same page, as they played a complicated trick on Littlefinger. That’s cool. But still, there are far more interesting things to do with the Lady of Winterfell and the only Faceless Assassin in Westeros.

Daenerys Targaryen’s character is often portrayed as an irrational hothead that annihilates great Houses with a single command. Nothing is communicated about her assertiveness or compassion as a ruler, and she spent the back-half of Season 7 making heart eyes at her nephew.

Fans on Twitter joke about weird aspects of the plot like this. Why is there romantic tension lingering between Jorah and Daenerys when he’s old enough to be her father?

Game of Thrones threw practicality to the wind in favor expedited travel and a faster place that let the show quickly hit all the major plot points, for better or worse. But still, that didn’t do anything to improve how the narrative treats women, which is very different from how the nature of Westerosi society oppresses women. A vaguely medieval time period isn’t an excuse for antiquated misogynistic tendencies in a society.

None of this is to say that Rick and Morty is a “better” show in than Game of Thrones, but the willful changes behind the scenes made a good show even better. What if Game of Thrones did the same?

Despite the misogynistic fanboy backlash to the stories in Rick and Morty’s third season, it’s almost impossible to deny that bring in more female writers has vastly improved an already great piece of television.

It’s probably already too late for Game of Thrones to follow suit, but how might the fantasy drama series improve from more female voices in its storytelling? We may never know.

Expect to wait a long time for Game of Thrones Season 8, but Rick and Morty Season 3 resumes Sunday, September 10 at 11:30 p.m. on Adult Swim.

More like this
Entertainment
7.31.2022 12:00 PM
'House of the Dragon' will obliterate one annoying 'Game of Thrones' rule
By Alex Welch
Entertainment
7.27.2022 4:15 PM
Everything we know about Rick and Morty Season 6
By Corey Plante
Entertainment
8.1.2022 1:00 PM
Rick and Morty: Vindicators creator reveals the origin story we “need” next
By Jake Kleinman
Related Tags
Share: