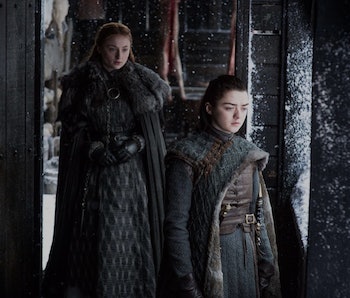 The ridiculously anticipated Season 7 finale of Game of Thrones, “The Dragon and the Wolf,” finally brought the great Houses of Lannister, Targaryen, and Stark together in the Dragonpit at King’s Landing. Despite the historic event, though, fans still seemed more focused on Arya and Sansa Stark.

Arya and Sansa surpassed their differences in the best way, proving that not even Littlefinger’s special brand of skeeziness can come between sisters.

“How do you plead, Littlefinger?” might just be the best new line in Game of Thrones history, the moment surpassed only by the flick of Arya’s knife across Littlefinger’s throat. Unsurprisingly, Littlefinger went, choking on his own words, while two of the strongest players in the game looked on in triumph.

Game of Thrones fans had been theorizing for a couple episodes that Sansa and Arya were up to something with all their senseless bickering. Their fight seemed to come out of nowhere, with Arya accusing Sansa of being weak and happily helping the Lannisters kill their father, Ned Stark, back in Season 1. People figured that either the show’s lack of female writers was to blame for what fans were terming “useless catfighting,” or the Stark sisters were plotting to expose and rid themselves of Littlefinger once and for all.

We should have known Sansa and Arya, two of the show’s most capable characters, had it covered.

Fans might have to wait a while to see how the sisters continue to grow their relationship in the final season of Game of Thrones. But, if they both make it out alive, it should be pretty fantastic.

Game of Thrones Season 8 does not yet have a premiere date.