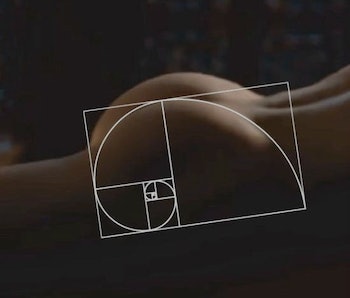 Seasons of Game of Thrones may be fleeting, but some things in Westeros are eternal. Mainly, the enduring perfection of Jon Snow’s butt. Fans of the King in the North’s backside, deprived since Snow hooked up with Ygritte in Season 3 (and that wasn’t even his butt!), were treated to a rare glimpse of his ample curvature when he had incestuous boat sex with Dany in the Season 7 finale.

In a profile shot of Snow’s thicc posterior, the genius behind the Twitter account Fibonacci Perfection saw the laws of nature on display. Snow’s butt, it seems, perfectly fits the Fibonacci spiral, a logarithmic spiral that grows according to a well-defined set of mathematical rules and never deviates.

Those particular rules govern the predictable growth patterns of many other beautiful things in nature, like sunflower seeds and Romanesco broccoli, but, of course, none of those things are quite as impressive as Snow’s backside. Just look at it.

The Fibonacci spiral, sometimes called the golden spiral, is often held up as an example of perfection in nature because of the simple elegance of its rules and the consistent way it manifests across many natural phenomena. It can be found in the swirl of a pineapple’s eyes, just as it’s seen in the blossoming of rose petals.

The golden ratio, in turn, is what happens when two numbers have a ratio that’s equal to the ratio of their sum to the larger number. It’s a lot easier to understand visually.

Like the Fibonacci spiral derived from it, the golden ratio can also be found in many of the things that humans consider “beautiful,” like da Vinci’s Vitruvian Man or Beethoven’s Fifth Symphony.

Beauty is, of course, subjective, but the closest we’ve come to having an objective definition of beauty stems from patterns rooted in the golden ratio. It’s thought that we’ve come to associate it with beauty because it’s everywhere with nature, which in turn is a result of it being a maximally efficient way to arrange things.

In nature, efficiency is perfection. Leaves that fan out from a stem according to the golden ratio, for example, are spaced out in a way that optimizes the amount of sunlight each one gets, and so it has a better chance of surviving than a plant with crowded leaves. This ratio persists in so many of the species that are alive today, strongly suggesting that it plays some role in survival. And what’s more beautiful than a thing that endures?

Which brings us back to Jon Snow’s golden ratio-approved butt cheek. Unlike the kids he’ll have with Dany, Viserion the dragon (RIP), and the Wall, his beauteous backside is eternal in its perfection.