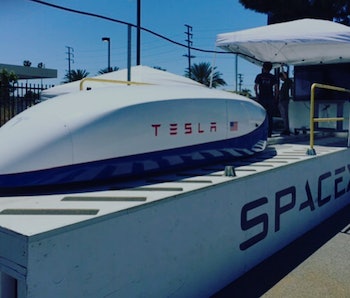 Elon Musk has taken the hyperloop to a whole new level. On Thursday, the tech entrepreneur uploaded footage of a pod made in collaboration with Tesla and SpaceX out onto the 0.8-mile test track at the company’s headquarters in Hawthorne, California. The pod achieved a staggering 220 miles per hour, which at the time of writing is the fastest speed publicly achieved by a hyperloop pod.

“We took the SpaceX/Tesla Hyperloop pusher pod for a spin by itself a few days ago to see what it could do when not pushing student pods (some need a push to get going, e.g. passive maglev),” Musk said on his Instagram post. “Got up to 355 km/h (220 mph) before things started 🔥. Kind of like racing with a tugboat. Maybe able get past 500 km/h (about half speed of sound) next month with a few tweaks or maybe tiny pieces …”

When Musk first released his idea for the vacuum-sealed transport system in 2013, he theorized the pods could move through the tubes at a maximum speed of 700 miles per hour. That means the current fastest pods are moving at around a third of the speed of its potential maximum. If Musk manages to reach 310 miles per hour next month, it would bring the record around halfway to the top speed.

Watch the pod run here by clicking through on the right arrow:

Just five days ago, SpaceX held a competition to see who could design the fastest hyperloop pod. The competing teams were Swissloop from Switzerland, WARR Hyperloop from Germany, and Paradigm from the United States and Canada. The winners, WARR Hyperloop, set a staggering record of 201 miles per hour.

Hyperloop is moving forward at staggering speed. In January, SpaceX held its first competition on the test track. WARR competed alongside Delft from the Netherlands and MIT Hyperloop from the United States. Unlike the August event, entrants were judged on a number of criteria. Delft won overall, but WARR claimed the fastest pod speed. It was only seven months ago, but WARR’s first entry now seems laughably slow: 56 miles per hour. The rate of progress since then has been incredible.

It’s not just SpaceX working to make hyperloop a reality. Hyperloop One, one of the most high-profile hyperloop firms, has built a test track outside of Las Vegas. The company reached 192 miles per hour earlier this month, but CEO Rob Lloyd said its system can go way faster. The reason why it didn’t, Lloyd told Inverse, was that the test track is just 1,640 feet and the team ran out of room to go faster. The current system is scalable, the company claims, to reach the full speed.

If an organization manages to reach the full top speed, it could revolutionize journeys. A trip from San Francisco to Los Angeles could take around half an hour. Hyperloop One has proposed nine European routes, 11 American routes and five Indian routes. It’s an exciting prospect for future travel, but it all depends on the progress made from here.