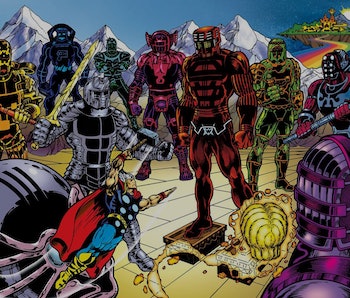 After battling Thanos in Avengers: Infinity War, the epic Marvel heroes will surely contend with another almighty, antagonistic force in the following sequel. But who are the villains of Avengers 4? A new fan theory proposes we’ve already seen them in Guardians of the Galaxy Vol. 2: the Celestials.

Some fan theories are hit or miss. Sometimes, fans nail it, as in the case of Jon Snow being a Targaryen. Other times, well — the island in Lost was anything but the Garden of Eden. Marvel fan theories are even harder to pin down simply because the uber-popular movies take great liberties with the source material, but a new fan theory speculating the villains of the still-untitled Avengers 4 is not bad at all.

On Moviepilot, Tom Bacon posits that the Celestials — an ancient race of powerful cosmic beings, created by Jack Kirby — will be the antagonists of Avengers 4, a film whose title Kevin Feige says would spoil Avengers: Infinity War. In the comics, the Celestials seek “balance” throughout the universe and judge species based on their evolutionary development. If a species fails the Celestials’ criteria, the Celestials destroy them. With the rise of superhumans in the Marvel Universe, us primitive men may have thrown off the balance of evolution, making us a target for the Celestials.

In the Infinity War preview released on the Blu-ray for Doctor Strange, writer Stephen McFeely very specifically used the word “rebalance” to describe Thanos’ motivations to mold reality as he sees fit. As fans know, based on the 1992 miniseries The Infinity Gauntlet, Thanos is obsessed with Lady Death and seeks the Infinity Stones to impress her. “Rebalance” the universe could very well mean using the Infinity Stones to mess with life and death. (But as Thanos wields ultimate power, Death ends up seeing Thanos as a threat, too.)

Bacon also brings up the increased presence of Celestials in the MCU. In the movies, a Celestial first appeared as a big, empty head in Guardians of the Galaxy as the Blade Runner-esque station Knowhere. In Guardians of the Galaxy Vol. 2, Ego the Living Planet (Kurt Russell) was changed from an Elder of the Universe — which would put him in company with Jeff Goldblum’s Grandmaster in Thor: Ragnarok — into a Celestial, which gave him unbelievable power that was passed on to Star-Lord (Chris Pratt). And, yes, that would make things very interesting for Star-Lord if this all pans out.

So, I buy it. I buy Thanos isn’t the actual Big Bad of the MCU, even if he is literally big and bad. There has to be more to the Marvel Universe than Thanos crushing on Death. Thanos being a pawn of the Celestials or even a Celestial himself could be a compelling adaptation of the comics that isn’t slavish to any one specific series. Fan theories are still a complicated subject, but if fans can guess Jon Snow’s heritage in Game of Thrones, then maybe fans can guess who the real villains will be in Avengers 4.

Y’all are still wrong about the island, though.