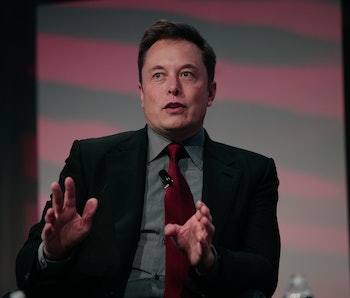 Elon Musk has a flair for the dramatics. It would be hard to so publicly champion going to Mars, making cars electric, and tunneling our way to a whole new infrastructure without showing off a bit of creativity. And while Musk’s plans can feel larger-than-life, his love of science fiction comes through in the names he gives to his spacecraft, electric vehicles, and tunneling machines.

Looking over every name Musk has given one of his machines, some patterns emerge. The avid sci-fi reader, but he’s also partial to the more literary references, with even a bit of ornithology thrown in. Musk isn’t above using a name as a subtle rebuke to his doubters — or a wry acknowledgment that his tunnel-boring machine moves at a snail’s pace — but mostly the names he picks evoke humanity at its most creative. They serve as a guide to the books, movies, and people who have inspired him.

The workhorse of SpaceX, the Falcon 9 rocket has made 40 launches, all but three of which were successful. Its more powerful sibling, the Falcon Heavy, is due for its first launch later this year, and it’s this rocket that will likely prove critical to the SpaceX trips to the moon and Mars. Such centerpieces of the company deserve a suitably iconic name, and the rockets are named for the Millennium Falcon of Star Wars, one of the most iconic ships in all science fiction — especially since the space shuttle already claimed Enterprise nearly 40 years ago.

These rocket engine families represent the past, present, and future of SpaceX. The since retired Kestrel powered the initial Falcon 1 rocket, the Merlin is still in use for Falcon 9 and Heavy, and Raptor is in development for the future Interplanetary Transport System.

While the name “Merlin” suggests a wizardly connection, all three names are just spin-offs of the original Falcon name, though now SpaceX is playing up the avian connection instead of the George Lucas link. Kestrels and merlins are both kinds of falcon, while raptor is the generic term for any bird of prey.

The Dragon spacecraft is the other all-important aspect of SpaceX’s current missions. It makes regular cargo runs to the International Space Station while the company works on approval for human missions with its larger successor, Dragon 2. That craft may well be that will ultimately take human travelers around the moon and onto Mars. That such a remarkable feat feels increasingly attainable underscores why Musk picked the name in the first place.

He’s said he named the spacecraft after the Peter, Paul, and Mary song “Puff the Magic Dragon,” as a shot at critics who derided SpaceX as fanciful when it launched in 2002. Draco is Dragon’s rocket engine, and there are a couple possible explanations for this one: It may simply be the Latin word for “Dragon,” or it might also be a reference to the constellation of the same name.

The overall name for the system that combines the Dragon 2, Falcon Heavy, and other tech to someday get people to Mars or beyond is fairly basic: Musk originally called it the Mars Colonial Transporter before renaming it the Interplanetary Transport System. But each mission beyond Earth will need its own unique name, and Musk revealed in 2016 that he’s got an early favorite in mind for the very first one: Heart of Gold.

It’s a reference to Douglas Adams’s seminal science fiction novel (and radio series, and TV show, and computer game, and a few other formats besides) The Hitchhiker’s Guide to the Galaxy. Stolen by Zaphod Beeblebrox, the roguish two-headed galactic president, the ship is powered by an infinite improbability drive. That feels appropriate, all things considered.

Just Read the Instructions and Of Course I Still Love You

The most colorfully named vehicles in the SpaceX fleet are these floating landing platforms. The Falcon rockets don’t have enough fuel to make it all the way back to their launch sites — either Vandenburg Air Force Base in California or Cape Canaveral in Florida — so Musk designed Just Read the Instructions and Of Course I Still Love You as autonomous drone ships, patrolling the Pacific and Atlantic respectively. The names come from the Culture series by Scottish science fiction author Iain M. Banks, specifically the 1988 novel The Player of Games. When announcing the names in 2015, Musk specifically dedicated them in memory of Banks, who had died of cancer in 2013.

Both ships’ namesakes are General Contact Units, which are sentient starships with deep compassion for organic life. Given Musk’s well-documented ambivalence toward artificial intelligence, this homage has to represent his most unreservedly positive feelings toward A.I. And if there ever need to be more drone ships, Banks left plenty more GCUs to pick from. Flexible Demeanour is the remaining ship from The Player of Games, but other Culture novels include It’s My Party And I’ll Sing If I Want To, Lightly Seared On The Reality Grill, Poke It With A Stick, Just Another Victim Of The Ambient Morality, and Grey Area, though that one has a rather unsavory nickname.

SpaceX isn’t Musk’s only venture with creative names. The Boring Company is working on developing tunneling equipment that can help build new underground infrastructure, alleviating urban traffic problems and possibly setting the stage for a Hyperloop. Musk revealed this May that the first tunnel boring machine is called Godot, after the never-arriving title character in the Samuel Beckett play Waiting for Godot. The naming convention for future boring machines will similarly come from plays or poems, with Musk suggesting the second or third such machine would take a name from poet Robert Frost — something to tie in with “The Road Less Traveled” seems an early contender.

There’s no great mystery to the names of Musk’s other companies: SpaceX is short for “Space Exploration,” while the Boring Company is a proudly awful pun. But why precisely is Musk’s electric car company named for Nikola Tesla? Beyond Tesla’s legendary status as one of humanity’s most brilliant minds, his 19th century work on an alternating current motor is a director ancestor of what was in the original Tesla Roaster. An archived version of the Tesla site expands on this:

The namesake of our company is the genius Nikola Tesla, an inventor, electrical engineer, and scientist. Among his life’s many inventions (and more than 700 patents) are the induction motor and alternating-current power transmission. Without Tesla’s vision and brilliance, our car wouldn’t be possible. We’re confident that if he were alive today, Nikola Tesla would look over our 100 percent electric car and nod his head with both understanding and approval.

The United Nations Educational, Scientific, and Cultural Organization (UNESCO) has declared 2006 the Year of Nikola Tesla, in celebration of the 150th anniversary of his birth. We are delighted that the world unveiling of the Tesla Roadster fell on July 19, 2006 — just days after his birthday.

Named after [the joke in Spaceballs](https://www.youtube.com/watch?v=ygE01sOhzz0, the “Ludicrous Mode” in a Tesla Model S will propel the car from 0-60 mph in 2.8 seconds, good enough to beat a Lambo in a drag race. The Model S P90D — “90” for a 90 kW battery pack — and the “D” is for the dual motors in the front and back of the car. For $10,000 more, advanced electronics pull more power out of the battery which equates to more speed.

The single-character names for Tesla’s various electric vehicles don’t seem like they could have much story behind them, but take another look at those letters in sequence. In case it’s still not clear, know this: The Model 3 was originally called the Model E until a threatened lawsuit from Ford forced Musk to change the name. As Musk revealed at the 2014 shareholder meeting, Musk explained the model names really were a silly “sex” innuendo, an off-the-cuff joke at a dinner party that had maybe gotten a tad out of hand. The Model 3 name at least sort of kept the gag alive, as it doubles as a backwards “E.” The promised Model Y is further intended to make Tesla “sexy,” or maybe that’s “S3XY.”

A far more fanciful and probably spurious theory holds that the Model S name is an incredibly sly double reference to both Henry Ford and 2001: A Space Odyssey. Here’s the theory from Australian internet pioneer and Tesla superfan Simon Hackett:

It seems to me to be an intentional throwback to arguably the first utilitarian vehicle to be mass produced – the Ford ‘Model T’. The use of ‘Model S’, being one letter back from ‘Model T’ in the alphabet, seems like a subtle echo of the cult classic “2001: A Space Odyssey”. The computer in the movie, HAL, is named with the three letters that come sequentially before the letters “I”, “B”, and “M”. So perhaps ‘Model S’ is both in homage to Henry Ford (and evincing an intention to create a new era of motor vehicle mass production for the new world), as well as being a subtle tip of the hat to Stanley Kubrick as well!

As Hackett himself admits, it’s also possible the “S” in Model S is just short of sedan. But given Musk’s love of imaginative names in all his other endeavors, we really wouldn’t put it past him.

More like this
Entertainment
8.5.2022 12:30 PM
For All Mankind Season 3’s space mogul is better than Elon Musk — here's why
By Ryan Britt
Innovation
8.8.2022 10:00 AM
A wild new plane-train hybrid could whoosh you to your destination — if it can get off the ground
By Molly Glick
Entertainment
8.7.2022 1:00 PM
ILM legends reveal the sci-fi movie that changed everything wasn't Star Wars
By Ryan Britt
Related Tags
Share: