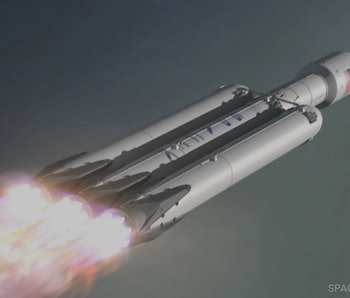 SpaceX CEO Elon Musk provided new updates Wednesday about what we can expect for the inaugural launch of the company’s new Falcon Heavy rocket later this year, at the 2017 ISS R&D Conference in Washington, D.C. The Silicon Valley bigwig offered this wry line to sum up his feelings on the entire project: “Major pucker factor.”

Musk’s use of military slang — “major pucker factor,” or “the tightening of the buttocks caused by extreme fear,” if you read Wikipedia — is another way of saying that the launch’s outcome is entirely up in the air.

The Falcon Heavy is the world’s biggest rocket, requiring the simultaneous ignition of 27 orbit-class engines.

“There’s, like, a lot that can go wrong there,” Musk said Wednesday. He encouraged people to come down to Florida to watch the launch happen later this year. “It’s guaranteed to be exciting,” he said.

“But it’s one of those things that’s really difficult to test on the ground,” he emphasized. Individual engines can be tested, and simulations can be run to understand what the dynamics might be, but launching a rocket for the first time is always a risk.

“Real good chance that that vehicle does not make it to orbit,” he said.

Musk hopes the rocket at least makes it far enough away from the launch site to avoid creating pad damage. “I would consider that even a win, to be honest,” he said to laughs from the audience.

Musk called the Falcon Heavy an incredible vehicle, but so many of its parts are untestable on the ground that the maiden launch will be more of an experiment than a proof of concept. “It actually ended up being way harder to do Falcon Heavy than we thought.” The loads and aerodynamics were drastically, unexpectedly different in many different ways. The rocket is much more than a bigger, souped-up version of the Falcon 9.

Nevertheless, it’s 2.5 times the payload capability of its predecessor — more than capable of sending, say, two passengers in a Dragon spacecraft around the moon, as is the plan for late 2018.

When is the Falcon Heavy Test Launch?

But first, the company actually needs to launch the rocket. No dates have been confirmed, yet, and all we really have is an expectation for later this year. SpaceX denied recently *Bloomberg’s September projection for the Falcon Heavy test launch.

SpaceX’s entire mission is to develop an interplanetary transportation system that can help sustain a colony on Mars. The viability of a heavy-lift rocketry system capable of shuttling spacecraft beyond low-Earth orbit is a critical piece of that infrastructure. The Falcon Heavy won’t be the rocket that sends people to Mars, but it will be a big part in the development of such a rocket.

First, however, it needs to work without blowing up in mid-flight.

Watch the full interview below:

More like this
Innovation
Sep. 20, 2022
SpaceX Starship orbital flight: Elon Musk's giant rocket just passed another critical test
By Mike Brown and Molly Glick
Innovation
Sep. 17, 2022
Why everyday household chores may be practically impossible for today’s robots
By Ayonga Hereid and The Conversation
Science
Sep. 23, 2022
Artemis I Moon launch may be delayed again — and NASA can't do anything about it
By Doris Elín Urrutia
Related Tags
Share: