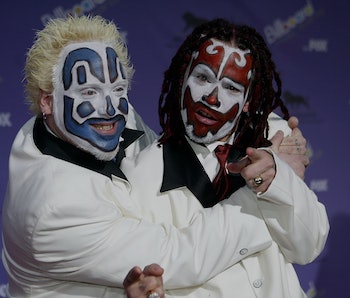 In a classic too-many-dates-to-the-dance scenario, Washington, D.C. has granted permits to both the pro-Trump group, “Mother of All Rallies”, and an Insane Clown Posse fan event, “Juggalo March on Washington”, for demonstrations on September 16.

The traffic is going to be terrible.

Drawing an equivalency between Trump supporters and Insane Clown Posse fans, colloquially referred to as Juggalos, seems natural here. There are obvious parallels, most notably pointed out by cultural critic and Juggalo Nathan Rabin. But using the socioeconomic and cultural similarities between the two groups to dismiss them both in one fell swoop is actually kind of a cop-out that becomes apparent when examining the motivation behind each group’s demonstration.

The “Mother of All Rallies” (or MOAR) wants to “SEND A MESSAGE TO CONGRESS, THE MEDIA, & THE WORLD WE STAND UNITED TO DEFEND AMERICAN CULTURE & VALUES,” or so their website shouts. The website lists the “FOUNDING FATHERS IDEA OF AMERICA” (sic) and “PATRIOTISM AND FREEDOM” as the movement’s pet causes, but these nebulous ideals seem to boil down to, “You have to listen to me when I’m being a bigot!”

Among the list of MOAR’s affiliated organizations are the Proud Boys, a group of “Western Chauvinists” founded by Vice co-founder Gavin McInnes, and the Alt Knights, the self-described “tactical defense arm” of the Proud Boys which is somehow worse. The Proud Boys and the “alt-right” in general have largely avoided getting labelled as gang members, despite the fact that they adhere to several elements of the government’s loose definition of one.

The participants in the Juggalo March on Washington, on the other hand, are not so lucky. The demonstrators aim to protest their classification by the FBI as a “loosely organized hybrid gang,” a claim they’ve apparently tried to dispute in court multiple times, even enlisting the help of the ACLU.

Testimonials on the Juggalo March’s website describe Insane Clown Posse members being barred from joining the military, losing custody battles and receiving harsher parole terms, because their bad taste in music and the extreme imagery associated with that bad music legally qualifies them as gang members in the eyes of the law. But unlike Faygo and face paint, violence is not an inherent piece of the Juggalo identity. Juggalos also apparently get involved in community service, sharing fundraising efforts and organizing food drives.

So, if you want to see people dressing up like idiots in service of an imaginary identity they’ve constructed in order to assuage their crippling sense of inadequacy, head to Washington, D.C. on September 16. The Juggalos will be there too!