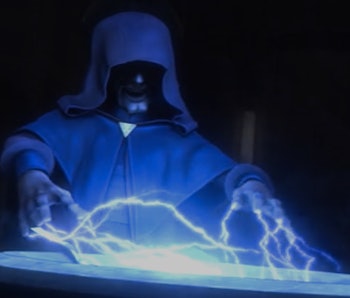 People who know the depths of the Dark side of the Force also know how to use a Sith cauldron. Darth Sidious and Darth Tyranus used this ancient Sith ritual to spy on Yoda during The Clone Wars, and now it looks like Supreme Leader Snoke might have a similar cauldron in The Last Jedi. And he could use such a thing to spy on Luke Skywalker.

On Thursday, the StarWarsLeaks subreddit noticed a mysterious blue circular object present in a photo for a toy version of Snoke’s throne room in The Last Jedi. While there’s not much proof that this thing is a Sith cauldron, it totally could be a Sith cauldron, because, believe it or not, a Sith cauldron is 100 percent canon.

In the final episode of The Clone Wars, Palpatine and Dooku channel the witches from Macbeth and use the magic of the Force to spy on Yoda. Palpatine does this by getting a little bit of Dooku’s blood to mine his deep connection with Yoda since Yoda is his former master. Palpatine and Dooku then speak to Yoda using a fake version of the Jedi Master Sifo Dyas, the guy who originally tried to figure out what was up with the clone army. So, like 50 years later, what could this mean for Snoke?

Basically, the guess here is that it could be the same thing, only instead of Dooku and Palpatine spying on Yoda with a cauldron, it could be Snoke and Kylo Ren spying on Luke Skywalker. Presumably, when he still went by the name of Ben Solo, Kylo Ren was Luke’s apprentice, so his link to Luke is similar to the connection Dooku shared with Yoda. And if Snoke does have this ancient Dark side artifact, it poses another interesting question: Because part of the power of this cauldron also allowed the user to alter their appearance, it’s not crazy to think Snoke could end up looking totally different than the way he appeared in The Force Awakens.

In other Clone Wars news, the entire series is set to leave Netflix in the U.S. on September 7, so your chance to stream this trippy finale episode of the series is coming to an end very soon.