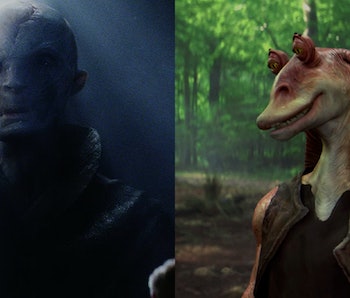 The mystery of Supreme Leader Snoke’s identity has hung over a galaxy far, far away for too long. And while Star Wars fans sure have a lot of theories about where Snoke came from and who he really is, very little is actually known about Kylo Ren’s mysterious master.

Snoke actor Andy Serkis spoke with Entertainment Tonight on Monday to reveal which of the internet’s insane Snoke theories is the absolute worst. His answer isn’t too much of a surprise.

Host Ash Crossan gave Serkis a “Your Snoke Theory Sucks” sticker during an interview before asking him what the worst theory is about Snoke’s identity.

“That he is Jar Jar Binks,” Serkis said. “That’s a really sucky theory. So I give that the full ‘Your Theory Sucks.’” At that moment, he held up the sticker and gave the theory a thumbs down to really drive the point home.

So, sorry to burst anyone’s Otoh Gunga bubble, but it looks like Jar Jar is out of the running (for now).

And if you’re still hungry for more Snoke content, check out “5 Crazy Theories About Snoke’s Identity in ‘Star Wars.’”