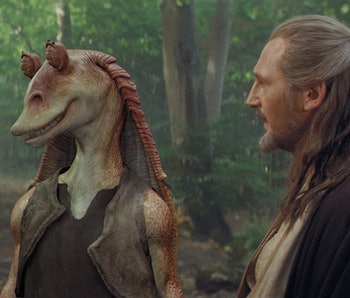 Qui-Gon Jinn has confirmed Jar Jar Binks’s fate post Revenge of the Sith. Liam Neeson, who portrayed Qui-Gon in Star Wars: The Phantom Menace, recorded a message for the fans at this weekend’s Star Wars Celebration while on set, supposedly in the Rocky Mountains while shooting a Jar Jar film.

Neeson, one side of his face smeared with (hopefully) fake blood, recorded a brief video message that teased at a joke Jar Jar film. At least, the assumption is that it’s a joke. But the real news is that, yes, Neeson confirmed that Jar Jar did fall to the Dark side of the Force after the events of Revenge of the Sith.

It seems helping cause the fall of the Republic in the Star Wars universe was too much for Jar Jar to handle. It probably scared him, and everyone knows what fear leads to, according to Master Yoda.

Watch the live stream of Star Wars Celebration below.