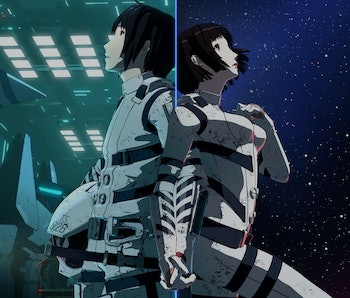 In early August, Netflix unveiled its plans to produce a slew of new, original anime, a sign that the California-based company is getting super serious about the medium.

By next year, Netflix be stocked with titles that include Baki, based on the popular manga about a martial artist looking to surpass his father; Devilman Crybaby, a reboot of the classic dark superhero franchise; Fate/Apocrypha, a new medieval fantasy; a second season of its acclaimed series Castlevania; and Godzilla: Monster Planet, which will tell a new story about the iconic kaiju like he’s never been seen before.

But for those looking to get their anime fix on Netflix now, there’s plenty to watch this very moment. While the service boasts hot, well-known shows like Attack on Titan, One-Punch Man, and Death Note, it’s also got some sweet anime with less fanfare. These are the six best unsung anime currently streaming on Netflix.

In 2014, the anime adaptation of the mecha manga Knights of Sidonia was a big deal, and Netflix exclusively acquired it for localization. Since then, however, the hubbub around the series has quieted down, even though Metal Gear Solid creator Hideo Kojima gave it high praise.

A futuristic mecha series, Knights of Sidonia follows a poor boy, forced to live underground due to his class, becomes a Guardian master and rises up to save the planet from an alien invasion.

Another Netflix original, the 2017 film adaptation of the manga series Blame! follows a girl who unwittingly causes extinction-level trouble in a post-apocalyptic nightmare where A.I. rules the planet. Featuring a breathtaking blend of CGI and hand-drawn animation, you only have yourself to, ahem, blame, if you sit this one out.

4. Gargantia on the Verdurous Planet

Gargantia on the Verdurous Planet looks like someone saw Battlestar Galactica and thought, “Let’s do that, but anime.” And yet, the excellent animation and gorgeous scenery of Gargantia on the Verdurous Planet make the series a must-watch for those looking for some darn good anime sci-fi. In the future, when mankind has taken to the stars and has entered a never-ending war against aliens, a teenaged soldier falls through a wormhole and finds himself on a strange, lush planet: Earth.

On paper, Kuromukuro sounds like someone took ideas from a grab-bag of anime cliches: giant robots, medieval Japanese architecture, high school teenagers, and some semblance of international intrigue. And that’s OK, because Kuromukuro, another series Netflix has localized, is an underrated gem with a haphazard, schizophrenic tone that’s just kooky enough to be charming. For anime novices looking for something to dip their toes in, well, Kuromukuro is no Cowboy Bebop, but it’ll satisfy just fine.

Let’s make something clear: Gurren Lagann is no underrated anime, nor is it exclusive to Netflix. However, since it’s available to stream, this animated phenom from 2007 is still THE series to binge for those yearning for (even more) giant robots in space. And this year being the tenth anniversary, it’s high time we fall in love with drills and screaming “Aniki!” like we did before.

To summarize its outrageous, generations-spanning plot is a fool’s errand, but if you want to feel the full spectrum of human emotions in 27 episodes, then look no further. Pierce the heavens!