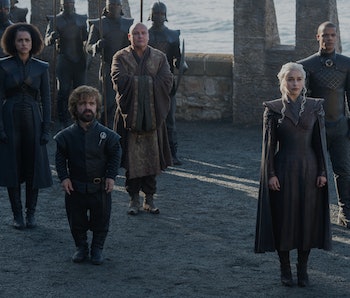 A conflicted character is usually more interesting than a perfectly good one, but Game of Thrones might’ve taken this to heart a little too much over the course of its seven seasons. The show’s remaining main characters such as Jon Snow, Daenerys Targaryen, Cersei and Jaime Lannister, and Bran Stark are truly flawed, almost to the point where they’re unrelatable. That’s why, unlike with other shows, the best characters on GoT are the sidekicks, the characters who, right now, aren’t fucking everything up.

Because let’s face it, most the remaining main characters on Game of Thrones are kind of trash. They make dumb decisions such as charging at a barely injured dragon to kill its mother, hypocritical ones about pride and the safety of others, and just plain rude ones by not thanking their saviors before shrugging and letting them leave (looking at you Jaime, Jon and Daenerys, and Bran, respectively).

The best characters currently on Game of Thrones are the sidekicks, the ones often used for some awkward comedic relief but whom always end up saving the “heroes” they serve. They’re beloved by fans and by the main characters who so desperately need their assistance, so we thought we’d give the best of them the love they deserve.

Yeah, fans might have been baffled after this week’s episode, “The Spoils of War,” by Podrick’s continuing inability to fight, but he’s still just about the best person on the show. He’s loyal to a fault, truly loves to serve Brienne, and treats everyone with respect. He’s also incredibly open to learning from people he knows are better than him at something, a rare quality in Westeros, where ego and ambition usually reign supreme. Brienne would probably be miserable without Pod around.

Sidekick superlative: Most likely to be worthy of “best friend” status.

Bronn is the only reason Jaime might still be alive after he charged at Daenerys and Drogon during the Lannister and Dothraki battle. He’s also the one who shot down Drogon in the first place. Bronn’s a fucking hero who chose to save people rather than take his gold and run. He gave Jaime the chance to escape — now, someone give him his castle.

Sidekick superlative: Most likely to save the hero’s ass and not let their ego get too big.

Meera has, so far, gotten the worst deal of the season. After three seasons of dragging Bran Stark’s ass around the freezing tundra, she managed to get the Three-Eyed Raven to Winterfell so he could inform his sisters that he’s a wizard (or something) now. After all that work, after she almost died, after her brother did die, Bran had nothing more to say than, essentially, “Okay, thanks, bye.” Here’s hoping Meera and her family open a nice bed and breakfast somewhere north of the Wall and stay safe.

Sidekick superlative: Most likely to seek out much-deserved revenge on the hero (cough Bran cough) if the hero lives through the war.

The King in the North would be lost without Davos, hands down (too soon?). Jon takes Davos with him to meet Daenerys at Dragonstone, showing that he not only trusts him but that he also relies on his counsel. Davos has been kind and level-headed from day one, looking out for children and remaining loyal to lords and kings who share his ideals, even if he has switched sides a couple times.

Sidekick superlative: Most likely to act as the necessary voice of reason on this damn show.

Tyrion Lannister has absolutely been downgraded to a sidekick role this season on Game of Thrones. There’s no point in denying it. In the first four episodes of Season 7, Tyrion has been a conduit for Daenerys and Jaime’s stories, connecting them while barely being given time to process his own emotions.

Tyrion has always been a fan favorite, not just for a position atop the Iron Throne but as a complicated, relatable character. But that doesn’t mean he’s not been downgraded to sidekick status recently; as soon as he saw Dany’s dragons at Meereen, he was a sidekick. Just like the other sidekicks, though, don’t count him down and out (especially because this is Tyrion we’re talking about).

Sidekick superlative: Most likely to rise (back) above sidekick status.

Seriously, dude, it’s time to leave your rowboat behind and get your land legs back. Arya needs a buddy (or if some GoT fans get their way, a boyfriend) and the people miss you. Like, they really miss you. Everyone’s trying to figure out exactly when Gendry will finally reappear after fucking off in a boat at the end of Season 3. Sure, Gendry hasn’t proved himself yet in Season 7, but he’s definitely going to make a splash when he comes back.

Sidekick superlative: Most likely to end up in a healthy romantic relationship with his hero.

Game of Thrones is currently airing on Sundays on HBO at 9 p.m. Eastern.

More like this
Entertainment
Feb. 7, 2023
Last of Us Just Stole a Trick That Game of Thrones Perfected
By Jake Kleinman
Entertainment
Jan. 30, 2023
Doctor Who Could Become the New Marvel — But There's a Catch
By Ryan Britt
Entertainment
10 hours ago
Last of Us Just Broke a Major TV Rule — and Disproved a Common Belief
By Dais Johnston
LEARN SOMETHING NEW EVERY DAY.
Related Tags
Share: