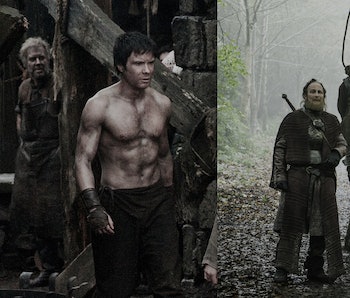 Season 7 of Game of Thrones will put more characters together than ever — 17 to be exact — if the rumors are to be believed. But one of those pairings will have intriguing ramifications on the larger plot: the long-lost Gendry and the Red Priest Thoros of Myr.

It’s been known for a while that Joe Dempsie’s Gendry would be returning to the show after taking a four season-long boat trip. Recall that Gendry briefly encountered Thoros of Myr and the the Brotherhood Without Banners in Season 3 when he parted ways with Arya to join them. He then left with Melisandre and fell victim to her sex magic. Davos helped him escape, resulting in his multi-season absence.

Now that Gendry and Thoros have been spotted together on the Season 7 set, we can discern that the Brotherhood Without Banners will have a role to play in the wars to come.

The Brotherhood Without Banners is a Robin Hood-esque outlaw group who work to protect the commoners and rebel against Lannister rule. But Season 6 made it clear that even the best intentions can be corrupted, as a segment of the Brotherhood attacked Ian McShane’s hippie commune. Luckily, Thoros of Myr did not approve, as Sandor Clegane ran into him in the middle of hanging the offending men.

Considering the fact that there has also been news that Gendry will team up with Jon, Davos, and Jorah for a mysterious trip, the addition of the Brotherhood is curious indeed.