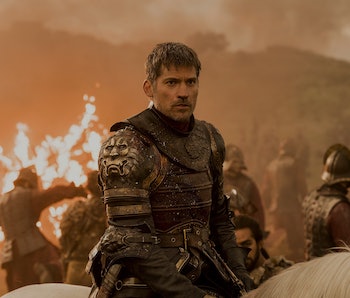 Throughout Season 7 of Game of Thrones, Tyrion Lannister has made a couple of bad strategic calls. But, he was completely right when he called his brother a “fucking idiot” for trying to kill Daenerys Targaryen by charging straight at her gigantic, and only lightly wounded, dragon. It seemed like Drogon was about to flame broil Jaime, but a well-timed tackle from Bronn pushed him out of the way, sending him into a nearby lake. Jaime survived fire, but was water as deadly a threat? The episode ends with him sinking to the bottom. Did Jaime drown?

This post contains additional spoilers for Game of Thrones Season 7 Episode 4, “The Spoils of War.”

So, is Jaime Lannister dead? There’s no way to say for sure, at least at this point, but I wouldn’t bet on it. To be clear, it’s entirely possible that he could drown. He was wearing heavy armor and has a golden hand, after all, neither of which are really conducive to floating. In the books, there’s a character called Victarion Greyjoy who makes a point of wearing full plate armor, even when he’s on a ship — a rarity, since if you’re pushed overboard, you’d sink like a stone and drown, just like it seems Jaime’s about to.

But, while Jaime almost certainly would die if he were to just keep sinking, that’s probably not where his story ends. Bronn, remember, wasn’t wearing armor. Having already saved Jaime’s hide once, Bronn could very well swim after his heavy employer and get him to safety. The lake could be the cover the pair need to escape Dany and her foes. Otherwise, they’d be rounded up as prisoners, as seen in the preview for Episode 5.

It wouldn’t really make sense for Game of Thrones to kill Jaime like this. With one exception, that’s not really its way. Consider the very first episode, which ended with Bran getting pushed out of a window (by Jaime, no less). Though the episode ended with a potentially fatal cut to black, he didn’t die. When Tyrion sank to the bottom of the stone men-infected water in the ruins of Valyria, Jorah rescued him. Really, the only time Thrones has left a character’s fate up in the air and then revealed their demise the following week was when Barristan Selmy died fighting Sons of the Harpy. Though, even in that case, Grey Worm survived. (Jon Snow doesn’t count, since he actually died — for a bit.)

From a storytelling perspective, it would be odd to kill one of the most important characters on the show in such a vague and unsatisfying way, rather than with a boom. Plus, there’s still so much for Jaime to do. If he drowns offscreen, he’ll never be able to fulfill a fan favorite prophecy. Back in Season 5, there was a flashback scene involving young Cersei and a fortune teller named Maggy the Frog. Maggy tells her fortune, predicting the demise of all her children. In the books, though, there’s an additional premonition:

“And when your tears have drowned you, the valonqar shall wrap his hands about your pale white throat and choke the life from you,” Maggy says.

In High Valyrian, “valonqar” means “little brother.” This deadly prophecy helps fuel Cersei’s hatred of Tyrion, whom she thinks will kill her one day. But, even though they’re twins, Cersei is technically older than Jaime by just a few minutes. This prophecy, combined with Jaime’s immense character development and slow turns against Cersei, has fans convinced that he’s actually going to be the one to murder her. It would be poetic — exactly the type of thing Game of Thrones excels at.

And, well, he can’t do that if he drowned at the bottom of a random lake like a chump.

Are there any other, more concrete clues about whether or not Jaime’s alive? Speaking to Entertainment Weekly, actor Nikolaj Coster-Waldau wouldn’t reveal his character’s fate, naturally, but he did make some ominous teases. Coster-Waldau said the script direction instructed the actors that “one of our main characters is about to die,” but it’s possible that was just to make sure they really amped up the tension.

Don’t put too much faith in the EW article, though. Remember, they’re the magazine that tried to convince you that Jon Snow was really dead.

The next episode of Game of Thrones Season 7 airs on HBO at 9 p.m. Eastern.