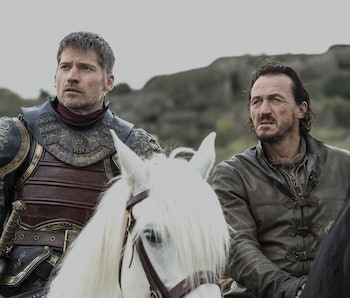 Now that Jon Snow and Daenerys Targaryen have met and Bran Stark has returned to Winterfell, Game of Thrones has hit the “fast forward” button on its plot. The fourth episode of Season 7, “The Spoils of War,” sees more character reunions than ever before. Jon and Theon have a not-so-friendly encounter, A Girl returns home at last, and — oh yeah — Jaime Fookin’ Lannister jousts a dragon as Tyrion looks on in conflicted horror.

Spoilers are below for Season 7 Episode 4, “The Spoils of War.”

Arya’s return to Winterfell is far warmer than Bran’s was in “The Queen’s Justice.” She bonds with Sansa over the fact that the artist screwed up Ned Stark’s statue and the fact that both have suffered hardships in their time away from Winterfell.

In fact, the only time their relationship seems strained to its Season 1 levels is when Sansa watches Arya be an absolute beast at sparring with Brienne in the courtyard. Sansa walks away with an unreadable expression — perhaps jealous that Arya can so clearly defend herself. If Sansa had the same skills, Ramsay would have barely been a blip on her radar.

The infamous catspaw dagger from the first season and Sam’s Citadel text also resurfaces. Littlefinger gives it to Bran Stark, who in turn gives it to Arya. Since Valyrian steel can kill White Walkers, this Chekhov’s dagger clearly has a role in the wars to come, even if its unsheathing was a little less dramatic than many fans theorized.

The Lannisters Send Their Regards

Jaime Lannister had one of the deepest character arcs in Seasons 1 through 3, but his development frustratingly plateaued in subsequent seasons. At last, in “The Spoils of War,” he gets a chance to kick it into high gear again on the battlefield with Daenerys and her Dothraki forces. As he faces off against another fire-happy Targaryen, going so far as jousting a fucking dragon, the shadow of his Kinglsayer past looms large.

As Tyrion watches from afar in disbelief, Jaime is prepared to die bringing down the Mad King’s daughter. Jaime’s horror at watching people burn around him clearly evokes his Season 3 speech to Brienne about the Mad King’s horrible joy in watching people’s flesh blacken. He’s visibly traumatized as his men go up in flames. Luckily, Bronn (yes, it was Bronn) won’t stand for it, and he executes a well-timed tackle, sending Jaime plunging into a conveniently located body of water.

What Is Dead May Never Die

Theon Greyjoy picks the wrong time to arrive at Dragonstone. His reunion with Jon Snow would not have been a happy one, even if his ill-fated Winterfell takeover in Season 2 had never happened. After all, Theon was always a dick to Jon in Season 1.

But because Theon betrayed Robb Stark and pretended to kill Rickon (RIP) and Bran (who Jon doesn’t know is alive) — well, the slogan is “the North remembers” for a reason. Sansa clearly told Jon about Theon’s role in her escape from Ramsay, as Jon tells Theon that’s the only reason he’s not killing him. It doesn’t remove the fact that Theon betrayed the Starks. He regrets it and went through hell for it, but “feeling bad about it” rings hollow to the King in the North with a pile of dead family members.

A Lannister Always Pays His Debts

Cersei Lannister gets just a short scene in “The Spoils of War” but she crucially brings up the Golden Company. To non-book readers, this is the largest and most expensive group of sellswords in the Free Cities. So, basically, picture an entire army of Bronns. If they’re on Cersei’s side, she could gives the Dothraki a run for their money. It could also be a way for Daenerys’s ill-fated ex Daario to come back into the story. Because everyone misses him so much.

I Will Take What Is Mine With Fire and Blood

Daenerys finally scores a much-needed win the old-fashioned way: with fire and blood. Thanks to some handy cave paintings from the Children of the Forest, she believes Jon about the existence of White Walkers and agrees to lend her dragons to the cause. Unfortunately, she’s still really into the whole “bend the knee” thing and won’t fight with Jon until he acquiesces.

They agree to disagree on that for now — even as the episode (and the creators’ commentary afterward) heavily foreshadows that Jon and Daenerys will eventually bang. Frustrated with Tyrion’s guidance, she demonstrates her newfound trust for Jon by asking him for battle advice. Jon tells her that she can either use her dragons to show everyone she’ll build a new world that is different from the shit they’ve always known. “But if you use them to melt castles and burn cities, you’re not different. You’re just more of the same,” he says.

Unfortunately, she only half-listens to Jon. By torching the Lannister army, she isn’t technically torching castles and cities. But take one look at Jaime and Tyrion’s faces as they watch the devastation, and they’re clearly seeing “more of the same” in flashes of the Mad King.

It remains to be seen if this is a short term-victory for Team Targaryen — after all, Bronn manages to injure Drogon. Still, he’s a hearty beast, and Daenerys wipes out most of the Lannister troops on the field. Cersei might end up needing the Golden Company if she wants any hope of beating her rival. Fortunes change quickly in Season 7.