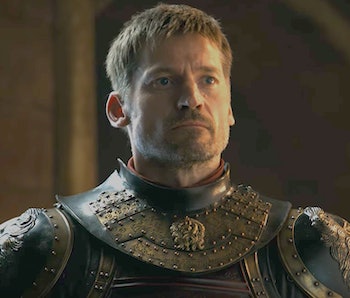 Jaime Lannister’s earliest appearances on Game of Thrones involves banging his sister and trying to murder a lovable child. It initially seemed impossible that he’d ever evoke sympathy or be anything more than a sneering villain. And yet, his redemption through Seasons 2 and 3 is among the show’s most compelling character arcs. But as the show enters its final stretch, Jaime’s arc has stalled. That’s why he’ll be the final word on what kind of show Game of Thrones is.

Unless the story takes a wildly unexpected turn, Nikolaj-Coster Waldau’s Kingslayer is not going to sit on the Iron Throne in the end. He’s probably not as narratively important as Jon Snow or Daenerys Targaryen. So why does his arc have so much power over defining the story?

Because in Seasons 2 and 3, it was the shining beacon of the show’s ability to have its cake and eat it too; to have scenes focusing on characters’ inner lives and big action set pieces.

Season 2 has the flashy spectacle of the Battle of Blackwater, but it also took time to linger on Jaime’s Hannibal Lecter act while he was imprisoned by Robb Stark. Season 3 had the big setpiece of the Red Wedding, but it also let the audience into Jaime’s mental state, in the form of his Kingslayer monologue to Brienne.

Set in Season 3’s “Kissed By Fire,” Jaime’s monologue is a lengthy, quiet scene devoted entirely to his interiority. His feelings about his actions and reputation are its only focus, and it’s just as compelling as a major setpiece. It does enough heavy lifting to effectively change the viewer’s opinion of Jaime and pave the way for his future actions. Any skeptic who writes the show off as “tits and dragons” — as Ian McShane once memorably said — need only to watch this scene to acknowledge that it’s far deeper.

But in Season 6, the show pivoted towards emphasizing action setpieces over character. Where before it combined them like a Martin McDonagh film, it became more Michael Bay-esque. And as it turns out, disregarding the characters’ feelings about the plot has a direct impact on it. When you neglect the heavy lifting, the payoff isn’t as sweet.

Aside from a short scene of ennui, Season 6 glossed over Jon Snow’s emotional response to his death and resurrection. As a result, an ordeal that should have been at least as meaningful and character-changing as Jaime’s Kingslayer speech instead had an aura of “so what?”

Similarly, Arya’s plot line in Braavos was accelerated in order to give her a speedy return to Westeros. It didn’t make sense that she would incautiously wander around a crowded marketplace when she knew assassins were after her. In fact, it was so inconsistent with her character that many fans theorized it was a trick. But as it turned out, it was just writing that breezed past any consideration of her interiority.

And of course, Jamie Lannister was sidelined in Season 6, appearing in just a handful of battle scenes. Because his arc highlighted the show’s deft mixture of plot and characterization in early seasons, the fact that he’s been mostly benched is telling about the tone of later seasons.

As Game of Thrones moves into its final two shorter seasons, then, Jaime Lannister’s resolution is key. Will it be a show that emphasizes plot and character in equal measure through the end? Or will that description only apply to its early seasons? No matter what happens — if Jaime turns out to be a legendary savior, Cersei’s murderer, or just a complicated dude — the way Game of Thrones handles it will tell.

Whatever form his end takes, whether or not the show allows him to have thoughts about it will reveal if it remembers its roots or is simply accelerating towards the finish line.

The seventh and penultimate seasons of Game of Thrones premieres July 16 on HBO.

More like this
Culture
5.19.2022 12:30 PM
Is The Staircase a true story? What the HBO show gets right and wrong
By Meg Walters
Entertainment
5.12.2022 3:00 PM
How Time Traveler's Wife became TV’s most intimate time-travel show
By Dais Johnston
Entertainment
5.12.2022 10:00 AM
How Watchmen uses time travel to explore the sinister cycles of racism
By Chrishaun Baker
Share: