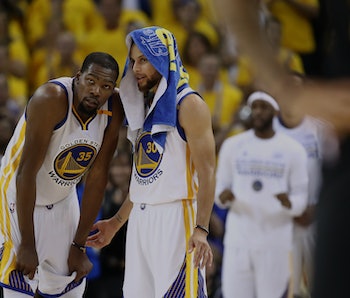 The next NBA season tips off October 25, and you don’t need a crystal ball to predict the Golden State Warriors are heavy favorites to repeat as champions. But even if it’s looking unlikely anyone can knock off Kevin Durant and Steph Curry’s juggernaut in Oakland, there’s still plenty of intrigue about what the future of the NBA has in store. And while Inverse doesn’t have a crystal ball, we do have a little something called swarm A.I. to help our readers/NBA fans come together to make predictions.

Here’s how it works: Each participant controlled a little golden magnet on the screen, and used it to drag the puck toward the answer they thought was the most likely outcome. Also, the closer a user puts the magnet to the puck, the greater the pulling force. This is where the hive-mind comes in: If a user sees the puck move toward an outcome, it triggers a psychological response. The user starts to readjust their decision-making, building toward a consensus. To read more about how Unanimous A.I. uses swarm A.I. to make scarily accurate predictions, check out our previous article on how Unanimous A.I. uses “swarm intelligence” to make predictions.

We asked our NBA swarm five questions about the 2017-2018 NBA season. You can check out our full stories on each prediction in the links below.

Carmelo Anthony is headed to the Houston Rockets, though it was close between that and staying with the New York Knicks — perhaps we split the difference and say a midseason trade?

Somebody’s loud father is going to be very happy, as Lonzo Ball is the swarm’s pick to win Rookie of the Year honors.

Russell Westbrook already messed around and averaged a triple-double for an entire season, so winning his third scoring title in four seasons doesn’t seem like too hard a task, now does it?

LeBron James already took his talents to South Beach and then back to Cleveland, but will he soon be picking his third team (or fourth team, depending on how you count those Cavs stints)? The Swarm says yes, and they’re feeling Los Angeles is where he’s headed — and, no, Clippers fans, don’t get your hopes up.

The swarm is feeling confident the East will eventually win another title… but boy, is “eventually” doing a lot of work in that sentence.

Kyrie Irving might think he’s leaving Cleveland, but our swarm is pretty sure he’s saying.

And here’s a quick look at some more results. Most are self-explanatory, though it’s worth noting the “someone else” pick for the Most Valuable Player vote means the swarm didn’t like the chances for provided choices: last year’s winner Russell Westbrook, runner-up James Harden, third-place finisher Kawhi Leonard, fifth-place finisher Isaiah Thomas, or Rookie of the Year favorite Lonzo Ball. That probably bodes well for fourth-place finisher LeBron James, who was left off, though you can’t forget the twin terrors in Golden State or even New Orleans Pelicans megastar Anthony Davis.