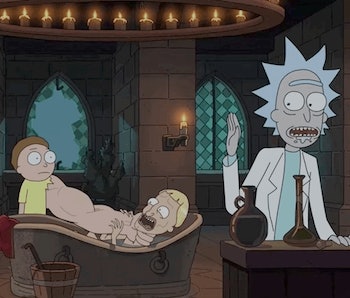 According to psychology, nothing good can happen to the brain of a 14-year-old kid when his brilliant but insane grandfather takes him on dangerous, violent adventures in space. Thus is the plight of Morty on Rick and Morty.

Especially in light of the Smith family’s recent attempt at family therapy in the episode “Pickle Rick,” the psychology of these characters has never been more readily apparent, and Morty might be in some serious danger, according to Dr. Kelly Sheehan, a researcher specializing in developmental psychology.

“Morty seems like a naïve, impressionable adolescent,’ Sheehan tells Inverse. “Experiencing many negative effects as a result of family conflict.” Chief among that conflict is the mistreatment he suffers at the hands of Rick, but his parents’ preoccupation with their own hang-ups isn’t helping either.

Rick’s transformation into a Pickle in the show’s most recent episode wasn’t just a crazy gag — it was a blatant attempt to avoid confronting his feelings in therapy. In the final scenes of the episode, Rick and Morty establishes how Rick’s brilliance and trauma make him utterly contemptuous of the “work” that is therapy. Meanwhile, Beth makes excuses for Rick out of desperation for his love and approval and out of fear that he might abandon her again.

Such a troubling family dynamic has taken its toll on Morty over the past few seasons. At the end of “Pickle Rick,” both he and Summer sheepishly want to return to therapy, but their desperation falls on the deaf ears of parental models that would rather drink away their problems and hide from complex emotions.

According to Sheehan, Morty is at an “impressionable age” in early adolescence, a time when there is a great deal of “brain and physiological development” going on. It’s “an important time of growth but also a vulnerable time.” Warmth and stability aid in psychological development, but Morty gets neither of those things from his parents and certainly not from Rick.

From a psychological standpoint, it’s not just Rick’s belligerent abuse that is causing Morty psychological harm. “It seems like Morty’s parents and Rick possibly didn’t provide him with a stable, warm household,” Sheehan explains, “and this could be resulting in anxiety and stress.” As any fan of the show can attest, Morty freaks out easily, frequently stammers, and has a lot of pent-up aggression that frequently explodes. Remember that time Morty got a little too into the Purge?

Between Rick’s bad influence and the broader instability in his home life, Morty’s psychological development has him careening down a dark path. (Could it even lend credence to the “Evil Morty” theory?)

“We often see children of this age as adult-like and capable of making their own decisions,” Sheehan explains, “but they’re nowhere near as developed as we often give them credit for.” Many of Morty’s decisions on the show are petulant and short-sighted, mainly because he’s just a kid. 14-year-olds “are actually quite vulnerable and impressionable, hence why Rick seems to be turning Morty evil.”

Sheehan assumes that Rick and Morty “is trying to suggest that these negative effects are changing who he is as a person (making him less caring, more nihilistic, and potentially self-destructive).” When Rick and Morty began, Morty was just a regular, somewhat dimwitted 14-year-old kid, but over time, he’s seen some shit. By now, he’s adopted Rick’s nihilistic mode of thinking and embraced the dangerous, violent life he’s been coerced into.

Morty seldom engages in behavior that might be considered “evil,” but it’s impossible to ignore his growing sociopathic tendencies.

In “Big Trouble in Little Sanchez,” Morty selfishly cares more about his rising popularity at school than the well-being of his grandfather. When Rick becomes the uber-cool “Tiny Rick” to investigate a school vampire, Morty and Summer’s classmates all love Tiny Rick. His grandchildren enjoy increased popularity by proxy. But, through songs and other random (and literal) cries for help, it becomes clear that Rick needs to get back into his older body ASAP. Morty ignores the signs and belittles Summer when she listens and acts with compassion.

This late in Season 2, Morty’s already endured a lot in his adventures with Rick, and the stress has made him insecure. According to Sheehan, Morty’s emotionally unavailable parents could have something to do with that: “Not having a responsive caregiver has been shown again and again to lead to unfavorable outcomes for children.”

These kinds of “unfavorable outcomes” arise when children aren’t able to form a “secure attachment” to warm, loving parents. “Children with a not-so warm, unresponsive, or absent caregiver often develop an insecure attachment,” Sheehan says. “They learn the opposite: that they are essentially on their own and that the world is a dangerous place.”

Morty learns this implicitly because he lacks secure attachment, but he learns it explicitly from the horrible things he’s seen and done in his adventures with Rick — like destroying their native universe and replacing their dead doppelgangers in an alternate reality.

Sheehan explains that trauma is often “passed down” from generation to generation. “Kids don’t develop in a vacuum. They are often aware and often internalize family conflict, their parents’ (and grandparents’) mental health issues, etc.” The Smith family, for example, is riddled with “conflict, mental illness, and instability.” Beth and Jerry’s troubled marriage is often treated as a punchline, but Summer and Morty feel the impact of that emotional frustration.

When they hit up a Mad Max wasteland in “Rickmancing the Stone” each of the Smith siblings responds in horribly violent ways to the separation of their parents.

Morty and Summer — who are 14 and 17, respectively — are at pivotal points in adolescence, which make them more impressionable and vulnerable to negative influences on their psychological development. Sheehan notes that the “effects of divorce are magnified in adolescence,” which would explain why both Morty and Summer acted out in violent ways in “Rickmancing the Stone.” The nature of their sci-fi adventures allowed them to act out in a world not bound by typical laws and social norms of standard human society.

As the rest of Season 3 unfolds, we’re bound to learn more about how Beth and Jerry’s divorce will affect the emotional dynamics of the Smith family, but we should probably be especially concerned for young Morty.

It’s clear that Rick is the Rickest Rick in all of Rick and Morty, but the influence he has on his grandson might just transform him into the Rickest Morty as well.