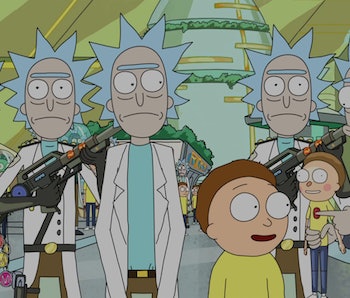 Rick and Morty of universe C-137 are the stars of Justin Roiland and Dan Harmon’s Rick and Morty, a fact that Rick C-137 might be very well aware of. The surprise first episode of Season 3 of the hit Adult Swim series reminded fans that Rick C-137 is the Rickest Rick of them all, which is why all the other Ricks (including the Council of Ricks) hate him so much. Here’s the very probable reason why our Rick is that special Rickest Rick.

Reddit user MyFifthALTaccount posted to r/FanTheories on Thursday to add to what the user claims is a previous theory of theirs: that the show’s main Rick is aware of the fourth wall, that all-important conceptual barrier that separates a work of fiction from its audience.

“He knows he is the main character and that his continued success is based on him having crazier and crazier adventures,” MyFifthALTaccount writes. “One of the reasons why he killed off all the other Ricks in the Council was to ensure that they couldn’t become the main character.”

The theory goes on to say that Rick taking out the Council of Ricks in Season 3, Episode 1 wasn’t just to free himself and his family — and to work toward that all-important Szechuan sauce — but that it was to rid himself of competition for the title of lead character. “Rick’s further descent into nihilism and sociopathy is largely because he knows now that he can get away with whatever [he] wants and people will love him for it. He can get McDonald’s to bring back a sauce from 20 years ago in the real world just because he can.”

That kind of power can go a long way. True fourth-wall awareness — a character knowing they’re a character in a fictional work for other peoples’ amusement — is a rare thing in. Marvel’s Deadpool comes to mind as the most recent iteration of on-screen awareness, whereas works such as House of Cards, Parks and Recreation, Ferris Bueler’s Day Off, and Wayne’s World use the fourth wall as a Shakespearean-style storytelling mechanism (or for humor) without ever hinting at any sort of self-awareness.

But this theory, that Rick is absolutely aware that he’s a character in a story that can and should do whatever he wants, puts Rick C-137 firmly in the driver’s seat. This is his rodeo now, bitches.

Rick and Morty Season 3 continues this summer, even though there’s still no squanchin’ date attached to it.