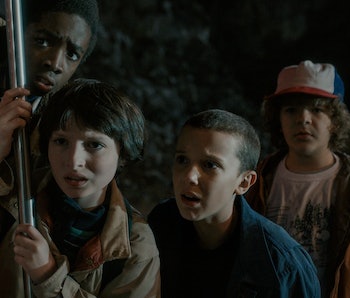 Imagine if Stranger Things Season 2 explored Y2K paranoia with Will, Dustin, Mike, Lucas, and Eleven as adults in the late-‘90s. Something like that, or another time period long after the ‘80s, was almost a reality for the sophomore season.

Netflix’s sci-fi darling, Stranger Things, was originally pitched as an anthology series closer in nature to American Horror Story than the more linear story we’re getting with Season 2.

That would have meant no ‘80s music, no retro outfits, and definitely no Justice for Barb.

In an interview with Screen Rant during San Diego Comic-Con, co-showrunners Matt and Ross Duffer confirmed the rumor that Stranger Things was almost something closer to an anthology series:

“There is some truth to that. Yeah. That was when we were pitching it. … Cause we looked at Stephen King’s IT and we liked that time jump that they made, so we kind of pitched that as a way.”

In King’s IT, seven children in 1958 band together to fight a demonic entity in the sewers beneath their town (yeah, it takes the form of a clown sometimes). The back-half of the story sees those same characters reunite in 1985 to confront the beast one last time. While not quite “anthological” in nature, IT does jump forward considerably in time, and film versions obviously need different sets of actors.

Fans love Stranger Things for many reasons, chief among them being how it captures the spirit of the ‘80s in a mystery sci-fi period piece. Everything from the title font to the soundtrack and character outfits thrives on ‘80s nostalgia.

It’s hard to tell where — or when — the Duffers’ original vision for Strange Things Season 2 would have gone, but a time jump akin to IT’s (27 years) would jolt the show out of the ‘80s to sometime around 2010.

The Duffers explained that “Netflix was really interested in it as a series,” reasoning that after spending a whole season with the charming kids, fans would want to continue their journeys. “Once we started building a writers’ room and working on the show, we started to develop it and plan a multiple season arc.” That multiple season arc will see a lot of changes in Season 2, but one of them definitely won’t include leaving the ‘80s.

Season 2 of Stranger Things will hit Netflix October 27, 2017, which is just in time for Halloween.