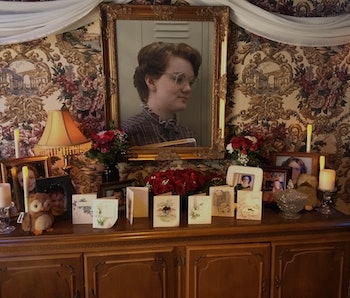 The honors keep rolling in for the late Barb Holland of Stranger Things. First, it was an Emmy nomination (for Shannon Purser, the actress who played her, of course), and now it’s a public memorial at San Diego Comic-Con.

After it became an unexpected cultural phenomenon last summer, Netflix has put the show at the center of its annual Comic-Con “experience” (a big, interactive pop-up event, more or less) ahead of its second season in October. The streaming giant’s Hilton headquarters features outdoor walls painted to look like the gritty New York of its Marvel TV shows, as well as life-size standees of the heroes in The Defenders. Further back is the entrance to a long, tall tent that houses a small, appropriately creepy Stranger Things museum.

The exhibit is dark and ominous, with most of the light emanating from the displays alongside the east and west walls. The first stop is a faux-memorial to Barb, the neurotic slut-shamer who went missing in the middle of the first season and became a social media phenomenon. The phrase “#JusticeForBarb” was a constant presence on Twitter’s trending topic list, and last week Purser was nominated for the Emmy Award for Guest Actress in a Drama Series.

There are bouquets of flowers that surround a credenza with cards and a whole array of photos of “Barb” … which are of course photos of Purser, either designed or photoshopped to look like they were taken in the 1980s. It’s a bit discombobulating, seeing a memorial filled with photos of a woman who is still alive. There is an added strangeness because it is just across the street from a main convention hall that houses a quasi-memorial to the late Carrie Fisher, a real woman who actually died last December. Both displays are set up to monetize fan mourning and sell products this fall.

The Barb memorial is much cheekier, and at the very least a very detailed and well-produced facsimile of a grieving family’s living room. And plus, it shows that some people in Hawkins gave a hoot about Barb.

Further along the left side is a reconstruction of one of the show’s iconic Season 2 poster images, with the four bicycles on the road set against the dark, fiery sky. Only, instead of the four young actors at the core of the series — Finn Wolfhard, Caleb McLaughin, Noah Schnapp, and Gaten Matarazzo — the bikes are empty, allowing for fans to jump aboard and take photos.

On the other wall are glass cases with the costumes worn by the aforementioned four actors, plus Millie Bobbie Brown’s most well-known Eleven outfit. They are all draped on mannequins, which make it look like the souls of the people who wore them have gone to the Upside Down. It’s pretty great.

There are several other props along that wall, including some of the characters’ favorite toys and food … yes, we’re talking about Eggo waffles.

After exiting the tent, there is an even creepier exhibit in a room just across a short strip of open air and sunlight. This one’s a recreation of the Byers’ living room after Will’s mom, Joyce Byers (Wynona Ryder), strings up the Christmas lights and paints the alphabet on the wall in an attempt to communicate with the Upside Down.

The place has a number of real (or, likely, replica) props, like lamps and cigarette butts, as well as some very detailed wallpaper made to look like the rest of her working class ‘80s living room.

Joyce Byers’s living room is also the setting for the short but impressive Stranger Things VR experience, which is housed in the room next to the actual Byers living room set. Created by CBS Interactive and run on the HTC Vive, the virtual reality app is low-key and creepy, but one element in particular stands out.

It’s hard to gauge how long something lasts when you’re in an immersive VR world, but it’s around five minutes and mostly consists of poking around in the shadowy living room. One controller is your flashlight, and the other is a free hand that you really just use at the end. The goal is to roam around the living room (you move locations a few times) and respond to the stimuli — there’s a storm going down outside that does not feel purely meteorological — and draw closer to uncovering a nasty secret.

The awkward part of VR is that when it works and you’re engaged, you’re moving around a small space, so you wind up tangled up in wires and bumping into actual walls. The virtual room felt very real, and though I could see the pixelations on the screen, and items looked CG-rendered at times, I really felt like I was in the Byers’ living room.

The experience leads up to a telephone call, which was the most immersive part of the whole thing. And not due to any conversation, but because, somehow, I actually felt tethered to the landline’s coiled phone chord. When I pulled the handset, somehow it felt weighed down by the tension of the chord, like it would only move so far and so fast. As I moved it back and forth, I actually felt like I was connected to the chord, as well.

Which is creepy, when you think about it, given what happens at the end of the experience. Watch it above to see what I mean.

More like this
Entertainment
3 hours ago
Stranger Things cast unpack a "quite metaphorical" Season 4
By Eric Francisco
Culture
1 hour ago
Every Stranger Things monster from Dungeons and Dragons
By Robin Bea
Entertainment
5.17.2022 10:30 AM
Do we really need Black Mirror Season 6? Why the Netflix series has lost its edge
By Dais Johnston
Related Tags
Share: