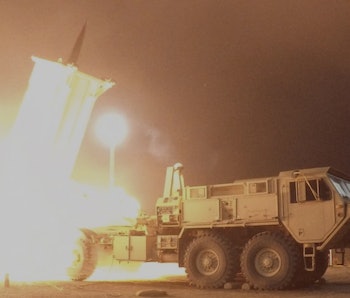 As tensions and concern grow about North Korea’s ballistic capabilities, U.S. Forces tested a missile defense system on Sunday, according to the military. The Terminal High Altitude Area Defense (known as THAAD) detects missiles using radar, deploys an interceptor, and destroys the them.

THAAD is capable of intercepting a missile inside and outside the Earth’s atmosphere during its final, or terminal, phase of flight.

The test was conducted in Alaska by firing a missile over the Pacific Ocean, according to a statement made by the Missile Defense Agency.

It was reported that soldiers carried out the same procedures as they would to employ THAAD in actual combat. Soldiers operating the equipment were not aware of the actual target launch time, according to the statement.

It was the 15th test of the THAAD system, and the exercise could be perceived to be sending a message to North Korea following Friday’s ballistic launch.

North Korea’s night time testing Friday of a Hwasong-14 intercontinental ballistic missile has raised tensions between the country and the U.S. It’s the second launch of a long-range missile within a month. It was estimated that Friday’s missile could travel over 6,200 miles; meaning it could hit not only Alaska, but most of America’s West Coast, and even the East Coast if fired in the other direction.

On Saturday, the U.S. sent two B-1 bombers on a round trip from an Air Force base in Guam to the Korean Peninsula, describing the flight as a direct response to the the North Korean weapons test.