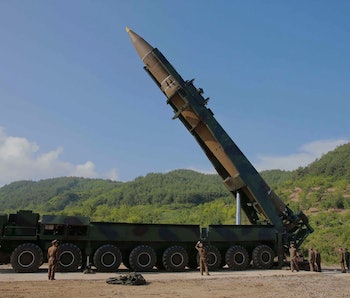 North Korea launched another Hwasong-14 ballistic missile on Friday, which, according to early reports, flew nearly 2,300 miles into the sky and 620 miles east before splashing down in the ocean between the Korean Peninsula and Japan. But the weird thing, experts say, is where and when North Korea launched the missile.

It’s possible, experts say, that the North Korean military was trying to “thumb their nose” at press reports predicting the location of their next launch, attempting to hide from U.S. spy satellites, or testing a system for launching multiple missiles at different sites. Whatever the case, the launch was sudden and unexpected.

The DPRK usually likes to launch missiles at the crack of dawn, but Friday’s launch took place at 11:45 p.m., under the cover of darkness, from a province observers didn’t expect. The launch was North Korea’s second test of the Hwasong-14 in less than a month, and experts have a couple theories as to why it went off in the middle of the night.

“I’m not usually up at this time covering a launch,” Melissa Hanham, a senior research associate at the James Martin Center for Nonproliferation Studies in Monterrey, California (where it was 7:45 a.m. when the missile launched), told Inverse.

Immediately after the launch, Dr. Jeffrey Lewis, director of the East Asia Nonproliferation Program at the Center for Nonproliferation Studies tweeted that the nighttime launch wasn’t a first for North Korea. In 2014, North Korea launched two mid range missiles in the early hours of the morning (local time) on March 26, just hours after a meeting in the Netherlands between leaders of the United States, Japan and South Korea to discuss the DPRK’s nuclear threat.

Hanham explained a few of the prevailing theories behind the most recent night launch. On Tuesday, the press widely reported that U.S. and South Korean intelligence officials had spotted military activity in the North Pyongan province of North Korea that could indicate the nation was setting up for an imminent missile launch, probably on July 27. But that launch never came, and instead, the DPRK fired off another missile a day later in the middle of the night, from the Chagang Province, not the North Pyongan (where other recent tests have originated).

“The press has been reporting observations of them setting up a launch,” but we didn’t expect it from this province at this time,” Hanham told Inverse. “They might be trying to thumb their nose at the press reports, or to do night launches in order to avoid observation.”

Hanham explained that any potential efforts to hide from U.S. spy satellites were futile, as the satellites synthetic aperture radar sensors don’t depend on sunlight to see. It was possible, however, that the DPRK chose an unorthodox time and location as part of a system to deploy multiple launches at multiple sites.

The most significant factor, however, was the missile’s impressive and troubling apogee, or furthest verticle distance. North Korea tends to fire its ICBM and mid range missile tests straight up in the air in order to not provoke surrounding nations, so their vertical distance is the best data experts have to estimate their range. Hanham said that “all the data is soft right now,” but the initial reports mentioned above say that the missile flew nearly 2,300 miles straight up, and stayed in the air for over 45 minutes.

If it was launched at a flatter angle for maximum distance, Lewis estimated that it could travel over 6,200 miles, meaning it could hit not only Alaska, but most of America’s West Coast, and even the East Coast if fired the other direction.

Essentially, what this means is that North Korea maybe, probably has a functional Intercontinental Ballistic Missile, or ICBM.

Hanham noted that U.S. Pacific Command is likely to give far more details about the launch in the coming minutes or hours. Once the data solidifies, we’ll know more about the Hwasong-14’s capabilities. But right now, it seems clear the North Koreans have a powerful weapon at their disposal.