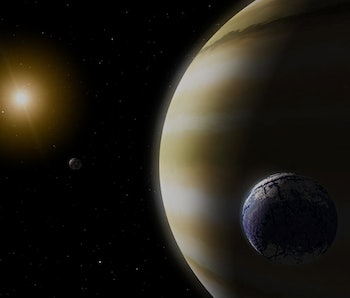 Extraterrestrial life may have its best shot at evolving on moons, not planets. Although not yet confirmed, scientists have found evidence of an exomoon orbiting a distant planet similar in size to Saturn. If confirmed, it will be the first known moon outside of our solar system, and if it has anything in common with the moons of Jupiter or Saturn, it may harbor conditions suitable for life.

On Thursday, astronomers published a study in which they cautiously detail their suspicion of an exomoon orbiting Kepler-1625b, a planet nearly 4,000 light-years away. For now, the exomoon is still considered a moon “candidate,” and the authors note that “it should be treated as no more than a hint at this time.” Come October, the powerful Hubble space telescope will zoom in on Kepler-1625b to determine if it does, in fact, have a moon.

Moons are great contenders for life, not only because our solar system contains moons NASA believes may be ocean worlds, but because many planets are often tempestuous, gaseous worlds where life seems improbable. For instance, no one believes that life could develop inside the swirling clouds of the gas giants Jupiter, Saturn, Uranus, Neptune. That’s half of our solar system’s planets eliminated as life-supporting worlds right off the bat.

More habitable, Earth-sized planets have certainly been discovered by the Kepler space telescope, but they’re rare. As of July 2017, the Kepler telescope has identified more than 4,000 planetary candidates, of which 2,335 have been confirmed. But just 30 of these planets are less than twice Earth’s size and orbit in their star’s habitable zone — a temperate region that could allow for liquid water.

Moons, however, can be livable well beyond the habitable zone for a solar system’s planets, as is the case for some of the satellites of Jupiter and Saturn. A gas giant’s gravity can churn up a moon’s insides and create a heated core, allowing for water and dynamic geologic events, like carbon-spewing hydrothermal vents. In our solar system, for instance, deep-space moons are undoubtedly the best contenders for potential extraterrestrial life, even though they’re hundreds of millions of miles away from the sun.

Saturn’s Enceladus, about 10 times Earth’s distance from the sun, regularly erupts plumes of water vapor, ice, salts, and gases into space. This gave NASA its first clue that an ocean might be present beneath the moon’s icy crust. In 2015, NASA found that Enceladus orbits with a slight wobble, which the space agency can only explain by the presence of a global ocean, sloshing around beneath the surface.

Closer to the sun, though still about five times farther from the sun than Earth, is Jupiter’s moon Europa. In 2016, the Hubble space telescope spotted what scientists suspect to be plumes of water vapor ejecting out Europa’s south pole, a phenomenon that wasn’t too surprising. Europa’s entire surface is comprised of cracked ice, which could be explained by powerful subterranean tides that tug and stretch its surface. Two other of Jupiter’s moons, Ganymede and Callisto, may also contain oceans of liquid water. This curious trio has attracted the attention of the European Space Agency, which will launch a probe in 2022 to fly around these moons and send radar pulses miles beneath their surface to see what lies below.

Most exoplanets are discovered by closely observing a star for slight dips in brightness, which show when a planet is passing by and temporarily blocking some starlight. But moons are typically smaller than planets, so detecting their transit — and the according minuscule dip in light they cause — might often be undetectable. The moons may be there, we just might not be able to see them, yet.

For now, Earthlings must await the results from the Hubble telescope to know if the planet Kepler-1625b does contain a moon. The planet is big and gaseous, and interestingly enough, it may orbit directly in its star system’s habitable zone. That could place its potential moon in a doubly perfect spot to support life.