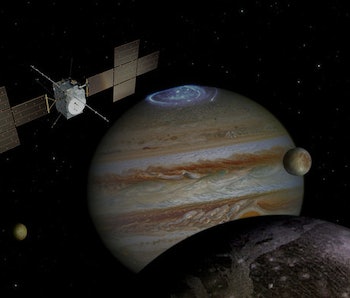 NASA’s Juno spacecraft is currently zipping around Jupiter, swinging in startlingly close to the gas giant’s turbulent cloud tops. The European Space Agency (ESA) released on Wednesday a rendering of what the next Jupiter probe, the Jupiter Icy Moons Explorer (JUICE), will look like. It has huge sunlight-absorbing wings, and will fly around three Jovian moons.

The icy moon explorer is set to launch in 2022, and it will take seven years for the probe to slingshot around the sun and then shoot 500 million miles into Jupiter’s orbit. Once there, the planet’s massive gravitational pull will suck the probe into its grasp, and JUICE will need power to travel between and investigate the potentially habitable moons, Ganymede, Europa and Callisto.

To generate this energy, the ESA plans to fit the probe with distinctive cross-shaped solar wings, which total 97 square feet. These solar wings are the largest ever flown on an interplanetary mission, according to the space agency, because at over 500 million miles from the sun, the sunlight is significantly fainter than on Earth, which is five times closer to the sun. The panels will produce 850 Watts of energy (a typical toaster uses between 800 and 1,200 watts).

JUICE will carry a “laboratory” of ten instruments, all of which will gulp some of the probe’s solar-generated energy. The instruments include cameras, lasers, and radars to study the behavior of Jupiter’s turbulent clouds and to scour the ice and minerals on the moons for life-sustaining ingredients, such as some of the compounds primitive microbes might eat.

One of the instruments, a radar called RIME, will penetrate nearly six miles down into the moons’ underground ice, giving scientists an unprecedented idea of what lies below the frozen ground. The radar is illustrated in the rendering above as one the long booms protruding out from JUICE, and for reference, that instrument is over 50 feet long.

Of Jupiter’s 69 known moons, Europa has received the most attention, and rightly so. Scientists suspect that an icy sea sloshes beneath its cracked, ice-blanketed surface. The criss-crossing fractures on the ice may be from separation, shifting, and re-freezing events, suggesting an internal heat source, which might warm the oceans below and perhaps spit nutrients — via hydrothermal vents — into the water. What’s more, in September 2016, the Hubble space telescope spotted what appears to be colossal plumes of water vapor ejecting from the moon’s south pole. The coming icy moon explorer could reveal if these plumes are coming from a vast Europaean sea, which begs a further question: What’s swimming in it?