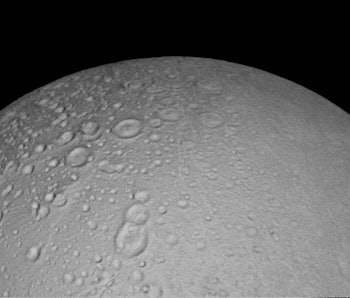 In 2015, the Cassini spacecraft swooped through the vapor plumes emanating from the south pole of the icy moon, and NASA has finally announced what it found during this sniff test: Enceladus’s underground ocean might possess conditions similar to those found in Earth’s undersea, hydrothermal vents. These vents support ecosystems based on organisms that consume chemicals for energy.

That forms the basis of a fascinating report published in the journal Science on Thursday, in which a team of scientists describe the presence of molecular hydrogen, which is reportedly apparent, in addition to the carbon dioxide, carbon monoxide, salts, and silica already measured in gaseous plumes arising from the moon’s surface.

In other words, Enceladus possesses potential evidence of microbial life below its surface.

Enceladus has been the talk of the scientific community for quite some time because it, along with Jupiter’s moon Europa, is considered one of the most likely candidates in our solar system for finding life. With the results announced Thursday, scientists have one more piece of evidence that chemical conditions on Enceladus could support living organisms.

“The new finding is hydrogen coming from the plume of Enceladus, and it could contain microbes from the sea floor of Enceladus,” announced Linda Spilker, Cassini project scientist at NASA’s Jet Propulsion Laboratory, at a press conference on Thursday. “After over 10 years of the Cassini mission, this represents a capstone finding for the mission and means that Enceladus has almost all of the ingredients you would need to support life here on Earth.”

Here’s why the finding of molecular hydrogen matters: It provides evidence that hot rocks and water are interacting under the moon’s surface. If water interacts with reducing minerals such as iron, it loses oxygen to become molecular hydrogen. Scientists suspect that this is what’s happening on Enceladus, hence the presence of molecular hydrogen in the plumes. This type of submarine process also suggests that methane is being produced in the same environment, and that could create an ecosystem in which chemosynthetic microbes, similar to ones near Earth’s deep sea vents, could live.

“We haven’t discovered evidence of microorganisms on Enceladus, but I’m encouraged by chemical data that could allow for this possibility,” Chris Glein, one of the authors of the new Science paper, announced at the NASA press conference.

And while this research only shows evidence that conditions could be right for microorganisms to live on the moon, not evidence of microorganisms themselves, NASA’s upcoming Clipper mission should give us a better idea of what the specific conditions are like on Enceladus and Europa, furthering the search for life within our solar system.

More like this
Science
8 hours ago
How the Webb Telescope could unveil the newborn universe
By CAROLYN COLLINS PETERSEN and Universe Today
Science
7.31.2022 7:00 PM
A wild twist on a modern technology could unleash nuclear fusion
By Andy Tomaswick and Universe Today
Science
8.12.2022 10:00 AM
45 years ago, the first Space Shuttle made history without going to space
By Allie Hutchison
Related Tags
Share: