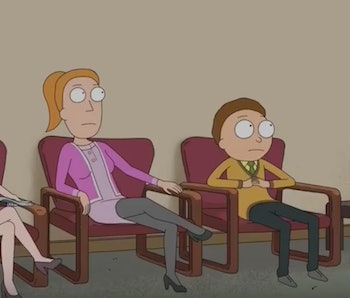 In case you didn’t know, “coprophagia” is the word for eating poop, and it’s apparently something that Mr. Goldenfold from Rick and Morty does on the regular. But he’d never admit to it.

Nobody actually says the term in the latest promo for Rick and Morty Season 3, but when Beth, Summer, and Morty bump into Mr. Goldenfold while waiting for a family therapy session, Morty’s math teacher excitedly says, “Oh! The Smith family minus a dad! How long have you all been eating poop?”

The three Smiths — each dressed fairly well — are stunned. “We have never eaten poop,” Summer clarifies. Mr. Goldenfold immediately backpedals, stammering out, “Me neither!”

It’s all a bizarre and hilarious misunderstanding that makes it obvious that Mr. Goldenfold definitely eats poop on the regular. The Smiths are waiting for Dr. Wong, a new character on the show who apparently offers both “Family Therapy” and “Coprophagia Therapy” (you can see it on the sign on his office door). The latter is a very real treatment aimed at helping people who suffer from obsessive poop-eating. Apparently, it’s something that Mr. Goldenfold is in dire need of.

Check out the promo right here:

We can’t confirm which episode of Rick and Morty Season 3 this is from, but if Morty’s sweater is any indication, then this will be from what’s been called the “Pickle Rick” episode. In it, Rick gets stuck as a pickle and struggles to survive against an army of rats and other threats.

When Morty encounters Pickle Rick in the garage, he’s wearing the exact same outfit with the yellow dress shirt, green tie, and yellow-orange sweater. On other shows, this wouldn’t really be a big deal, but considering the fact that character outfits rarely change on Rick and Morty, it’s safe to say that this Coprophagia Therapy scene will happen during the Pickle Rick episode.