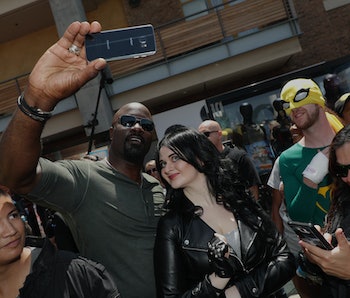 Cosplayers got a special treat at Comic-Con this year. The real Defenders took to the floor to take selfies with fans, proving that just because there’s a schedule doesn’t mean there aren’t surprises. On Day 2 of the annual Comic-Con International taking place in San Diego, the good people behind the upcoming Marvel/Netflix series The Defenders — a crossover that will unite the worlds of Daredevil, Jessica Jones, Luke Cage, and Iron Fist — surprised the thousands of fans in attendance with a special appearance by The Punisher star Jon Bernthal and a screening of the first episode of The Defenders

On Friday afternoon, the cast and producers of The Defenders were greeted in the hallowed halls of Hall H in the San Diego Convention Center for their panel. Towards the end of the panel, The Walking Dead alum Jon Bernthal made an unannounced visit to the delight of MCU fans. Bernthal is set to reprise his role as Frank Castle/The Punisher from Daredevil Season 2 in his own upcoming Netflix series, The Punisher, which is slated to premiere later this year.

And then, the panel ended with a screening of the entire first episode of The Defenders, which was definitely a highlight for the lucky few thousand who were able to make it.

Here are some photos of the event, for those who missed it:

See the new trailer for The Defenders below.