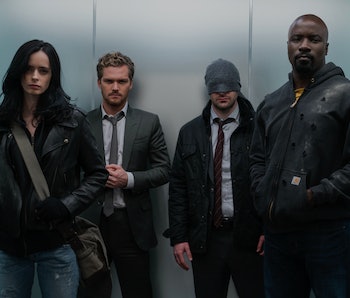 Even at 94-years-old, Stan “The Man” Lee is still cheerleading hard for Marvel’s movies and TV shows. In a new trailer for The Defenders, which premieres August 18 on Netflix, Lee gives a few inspiring words set against recycled footage from Daredevil, Jessica Jones, Luke Cage, and Iron Fist. And at the last moment, the trailer gives just a glimpse of the next Marvel/Netflix series, The Punisher, starring Jon Bernthal.

The trailer, which came out on Thursday via Netflix Korea’s Twitter account, features Lee riding in the back of a car as he witnesses some pretty hectic action around New York City. “They’re the greatest stories ever told,” says Lee as he sees Daredevil (Charlie Cox) and Jessica Jones (Krysten Ritter) do their thing. “Heroes show us we don’t need to be perfect to do what’s right. It’s not about living in fear, it’s about facing injustice.”

“It’s not about feeling powerful,” Lee continues as he passes by Danny Rand (Finn Jones) busting himself out of the hospital, “but finding your calling when you least expect it.”

And as Lee passes by Luke Cage (Mike Colter), he says, “They show us it’s okay to be vulnerable no matter how tough you are. Because even though they’re heroes, they’re still human.” How poignant! After showing each individual show’s logo, the trailer then fades to Bernthal — dressed in full Punisher gear — declaring, “Looks like I got here just in time.”

Yeah it’s pretty gnarly. Check it out below.

Marvel’s The Defenders premieres on August 18 on Netflix.