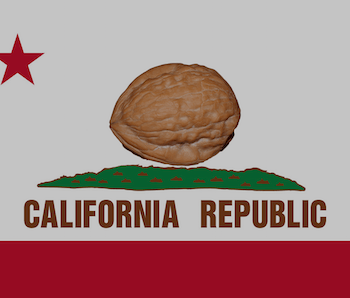 On July 10, California Governor Jerry Brown, America’s wannabe science president, signed a law declaring that the Golden State has four official nuts: the almond, walnut, pistachio, and pecan. In the letter of the law, all four are collectively called the “state nut,” singular.

There are many strange things about this law, but perhaps the most bizarre is the fact that none of these are nuts.

As the Los Angeles Times pointed out on Wednesday, all of those are the seeds of stone fruits, known botanically as “drupes.”

A true nut looks basically the same on the tree as it will on your plate (at least, until you crack it): hard and dry, its outer shell the hardened outer wall of a flower’s ovary. Chestnuts fall into this category, along with hazelnuts and acorns.

But drupe-derived “nuts” don’t work that way. Fake, culinary nuts like pistachios, almonds, walnuts, and pecans are actually the hard seeds at the centers of larger, wetter, fleshier fruits. A good way to detect a fake nut is to see whether individual nuts come in groups. Most true nuts are singletons, but drupe seeds like to stick together.

Not all drupes are liars: Peach pits fall into this category but have their sugary flesh still attached, like honest foodstuffs. Coffee, plums, and cherries are drupes as well — though coffee masquerades as a bean (the rascal), and cherry doesn’t actually call itself a berry (but everyone’s pretty sure it’s fronting).

The story of how they all became the state’s collective nut is actually kind of heartwarming. The Times reports that the fourth-graders of Marc Medefind’s class at Margaret Sheehy Elementary School in Merced discovered that the state was missing an official nut and wrote to Assemblyman Adam Gray. Gray brought the kids to the capitol to lobby for their favorite nuts.

Inverse can only conclude from all of this that Medefind needs to bone up on his drupes.

More like this
Science
5.12.2022 6:00 PM
Surprise! Biologists find that plants can grow in Moondust returned by Apollo
By Kiona Smith
Science
22 hours ago
Look: Hidden fossils reveal a microscopic creature that may be resilient to climate change
By Jennifer Walter
Science
22 hours ago
The most controversial alien sci-fi movie on Amazon Prime explores a murky theory on the origin of life
By Tara Yarlagadda
Related Tags
Share: