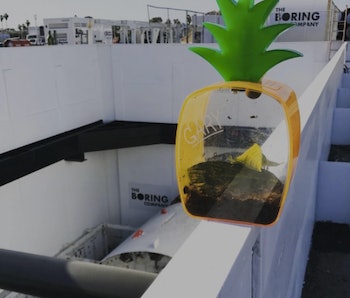 Elon Musk has some weird hobbies. His most recent passion is the Boring Company, a company whose tongue-in-cheek name belies its ambition to end southern California’s hellish traffic via a massive network of tunnels. But there’s little chance that it gets in the way of daily activities at SpaceX, because Musk says the whole operation is pretty chill.

Musk talked about the Boring Company briefly during the ISS R&D conference in Washington, D.C., on Wednesday, joking that it was a “low-stress activity,” mostly because there aren’t any expectations around it. Both Tesla and SpaceX face an enormous amount scrutiny from media, investors, and the government, and Musk is alone in the hot seat whenever lawsuits strike and scandals break.

The Boring Company, meanwhile, is working on improving a tunnel machine named Godot — as in Waiting for — that’s so slow it’s getting crushed in a virtual race with the company’s pet snail.

“We’re digging a tunnel, I don’t know if you heard about that,” Musk said. “It’s kind of a low-stress activity because everyone expects it to fail. The groan-worthy joke that I make about tunnels is they have low expectations — there’s nowhere to go but down.”

Musk compared it to the very early days of SpaceX, when everyone else in the aerospace industry called him “internet guy,” in reference to the initial billions he made off of PayPal and Zap2it, and assumed he would fail. But that nickname sold Musk a bit short, he feels. “They’ve stopped saying internet guy,” he said. “I think they’re going to start saying ‘transport guy.’”

He might be right. The Boring Company’s first tunnel is already under construction. But first Godot probably ought to overtake that snail.

More like this
Innovation
6.15.2022 9:00 PM
Vulcan vs. Atlas V: What you need to know about the ULA's next mega-rocket
By Harry Stoltz
Innovation
6.27.2022 8:00 PM
Artificial photosynthesis can grow plants without light — and may solve a planetary dilemma
By Steph Lee
Innovation
6.25.2022 10:00 AM
9 veggies that are healthier cooked than raw
By Laura Brown and The Conversation
Related Tags
Share: