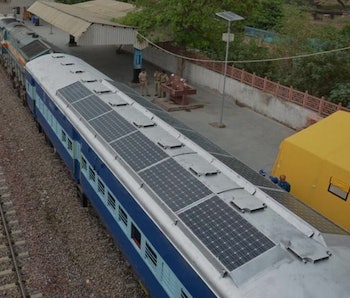 Trains guzzle gas like no other machine. Just ask Indian Railways, a leading transportation provider a country that’s home to 1.3 billion people. In an effort to start cutting down on diesel fuel, the company last week rolled out its first partially solar-powered train.

The new machine — one of 11,000 trains Indian Railways operates daily — is decked out with 16 shiny photovoltaic panels. But instead of replacing the diesel engine altogether, the solar energy is used only to power lights, fans, and other supplemental energy suckers.

While these particular efforts are led by the railway business, they’re happening against a larger backdrop of India’s commitment to fight climate change. In 2015, as part of the Paris Climate Agreement, India committed to getting 40 percent of its energy from fossil fuel-free sources by 2030. Since then, the country has dealt with a heat wave last summer that reached 128 degrees Fahrenheit, some of the worst air quality in the world, and rapid depletion of many of its natural aquifers.

Right now, Indian Railways estimates every train with six solar panels like the one revealed July 14 will reduce fuel consumption by more than 5,500 gallons of diesel a year. That’s hardly going to fix the company’s energy problem, but it’s a start. And, Indian Railways says, this is just a first step. The company reportedly hopes to generate 1,000 megawatts of solar energy by 2020 and continue to expand its environmentally-friendly energy sources from there.

More like this
Innovation
Sep. 22, 2022
Trash can-sized robots could revolutionize how you travel — but there's a catch
By Molly Glick
Innovation
Sep. 25, 2022
ePlane? Electric planes may come sooner than you think
By Gökçin Çınar and The Conversation
Science
7 minutes ago
5 lessons from the most iconic climate documentary of all time
By Tara Yarlagadda
Related Tags
Share: