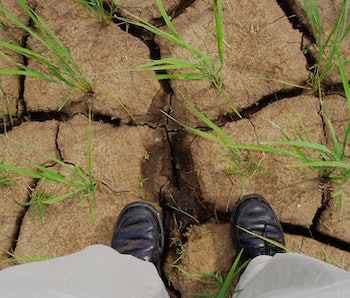 India’s national heat record was demolished on Thursday when the city of Phalodi reached a brutal 128 degrees Fahrenheit. Located in the northern desert state of Rajasthan with a population a bit over 44,000, Phalodi is now the epicenter of a scorching heat wave affecting more than 300 million people that has already led to the death of at least 160 individuals. Given the longstanding association of heat waves and upticks in crime, it’s not unreasonable to wonder whether northern India might be on the verge of an rise in violence.

The majority of those who have been killed by the heat wave, the worst since 1956, have been laborers and farmers, overcome by heatstroke. India Today reports that thousands of farm animals have died and that thousands of distressed farmers have taken their own lives. Though the latter statement feels inflammatory and potentially false, there are likely examples — and self-violence is societal violence. The secondary effects are manifesting themselves.

While crime is obviously affected by numerous variables (a crime can’t be blamed on weather alone) studies have consistently linked extreme climate with violent behavior — the major factors driving this being aggression and scarcity of resources. This scarcity-driven violence is what former presidential candidate Martin O’Malley referenced — and was subsequently mocked about — when he connected climate change to the formation of ISIS. But academic research indicates that O’Malley, though bad at debating, wasn’t wrong: Extreme weather impoverishes farmers and laborers, places a stress on resources, which ultimately results in violence.

It would be irresponsible to predict that India’s weather will cause a major social or political upheaval, but it’s fairly reasonable to expect the conditions to increase aggressive behavior. The caveat here is that, as some researchers from Florida State University have demonstrated, is that heat also limits violence. Once it is more than 80 degrees out, people have a tendency to stay inside. The problem this research fails to address is, essentially, inevitability. As a team from the University of Michigan demonstrated, time of day is the critical factor: People will stay inside if it’s mid-day and people have reason to believe it will get cooler. If it’s morning or evening and scorching out, behavior gets less predictable.

“Results show that global warming trends may well increase violent-crime rates,” writes Iowa State University psychologists Craig Anderson in Current Directions. “If this heat effect is truly caused by heat-induced increase in aggressive motivation, then increased violence can be added to the list of negative social consequences of global warming.”

India’s heat wave — and it’s 2015 heat wave — is definitely driven by climate change. This is only going to continue: The National Oceanic and Atmospheric Administration has said this sort of weather will double in frequency by the end of the 21st century while the heat waves in India will be longer, more intense, and occur more often.