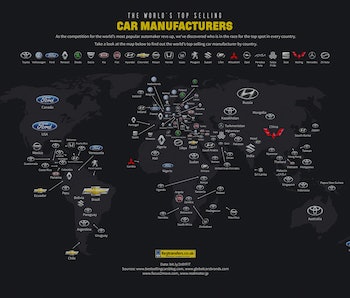 Toyota really does rule the world’s road — at least for now.

A map of 2016 car sales data shows that while Ford was the strongest car brand in the United States, the United Kingdom, and Canada, Toyota’s interlocking ellipses logo was omnipresent in almost 50 countries, especially those in South America, Africa, and Southeast Asia.

But the data, compiled by British company Regtransfers, doesn’t just show the success of a select few brands. It also hints as the rapid changes in the car industry in recent years, from a shift in American drivers’s values to China’s growing influence in the global auto scene.

You can find a high-resolution, zoom-able version of the map on Regtransfers.

See also: The 1997 Honda Accord Tops the Most Stolen Car List Again

This hasn’t been a great year for American car sales. In May, the auto industry its fourth straight months of losses, which was the longest downward stretch since 2009 when the whole of the United States — and its banks and automobile industry in particular — were in dire economic straights.

The reasons for this more recent decline are complex, but analysts think it comes down to the transportation “revolution” underway. American drivers increasingly value hybrids and electric vehicles and are even eyeing driverless vehicles.

In order to invest in new technology to meet these demands, manufacturers like Ford have considered job cuts and other budget-trimmers to free up money for research. Meanwhile, nimble startups like Tesla continue to outpace traditional builders. This, coupled with the rise of rideshare companies like Lyft and Uber, has hacked away at GM, Ford, and even Toyota have struggled to keep their competitive edge.

Despite penny-pinching in the United States auto market, the Chinese government has held steadfast to its belief the future of its country is tied to the future of the car. In April, China’s Ministry of Industry and Information Technology said the country aims to sell 35 million cars by 2025. It’s also pushing for at least one-fifth of those sales to be all-electric.

This vision is mirrored in the car sales map. Just six years ago Volkswagen was the the most popular car brand in China. But in 2016, Chinese manufacturer Wuling Hong Guang has taken the reigns as the nation’s most popular car company.

Additionally, Chinese company ZX Auto is currently the most popular car in Libya, a byproduct of China’s efforts to export its vehicles to the Middle East and North Africa starting back in the 1990s.

How exactly Toyota — or any other international car company — will navigate this upheaval in the auto industry is unclear. But expect to see car sales maps looking a lot different in the coming decade.