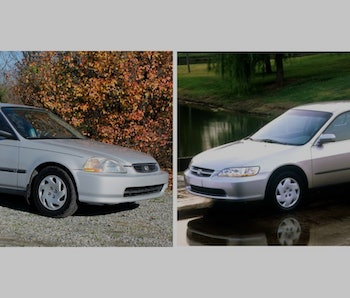 When it comes to theft prevention, not all cars are created equal, as the National Insurance Crime Bureau’s annual Hot Wheels report shows.

The latest report, published Wednesday tracks the most-stolen vehicles of 2016. It shows that while anti-theft technology has gotten more sophisticated, drivers are as dumb as ever, with one out of every eight vehicles stolen in 2016 simply because people left their keys in their car.

What’s more, the report, which is based on an analysis of police theft data from around the country, shows that while car manufacturers have been getting smarter, it’s not just those who own old, low-tech vehicles who have something to worry about.

There are several reasons these vintage models are a carjacker’s first target. For starters, they were incredibly popular cars, making them plentiful pickings for thieves. More importantly, though, they don’t have smart key technology, the electronic access system developed in 1995 and universally used today. What’s more, this mediocre tech is only exacerbated by the fact the Honda Accord is perhaps the longest lasting cars around, meaning even its most vulnerable late-‘90s versions are still on the road.

The impact of this old technology is especially clear when comparing thefts of 1997 Honda Accords with its 2016 counterpart. The Hot Wheels report showed that, last year, fewer than 500 2016 Honda Accords were stolen.

While drivers of old Honda Civic and Accord have a little something extra to keep them up at night, a variety of cars ended up in the top 10 list, including more recent cars.

The 2016 Toyota Camry, for example, was the only 2016 car to have over 1,000 thefts. But the 2015 Nissan Altima and Toyota Corolla were in the top 10, too. According to the bureau, this can be attributed in part to jackers getting more tech-savvy and, frankly, a lot of driver error.

For starters, in 2016 a new “mystery device” that can open and start vehicles made its debut. “Relay Attack” units can hack into cars and trucks that feature a keyless remote and a push-button ignition. Though car manufacturers try to keep ahead of these hacks, it doesn’t always work.

The bigger problem, however, is the car owners themselves. In 2015, some 57,000 cars were reported stolen because drivers left their keys in their cars. “Technology is working, but complacency can defeat it,” the report states. “Thousands of vehicles continue to be stolen each year because owners leave their keys or fobs in the vehicles, and that invites theft.”

So please, don’t be a Hot Wheels statistic. Lock up — and bring your key with you.