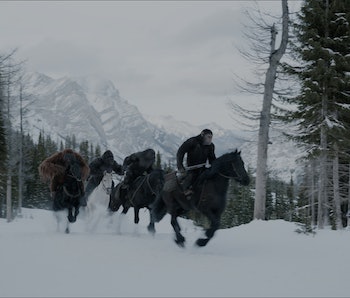 Rebeca Atencia, Ph.D., is nothing like Woody Harrelson’s ape-slaying Colonel in War for the Planet of the Apes, although both spend a lot of their time thinking about chimpanzees. Atencia cares for over 150 chimpanzees at the Tchimpounga Chimpanzee Rehabilitation Center, established by the Jane Goodall Institute in 1992 in the Republic of Congo. As the lead veterinarian and head of sanctuary, she has an intimate knowledge of the behaviors of wild chimps. Unlike the Colonel, she believes humans can live peacefully with these extremely intelligent beings.

That said, she’s aware of what they can and can’t do. Atencia recently told Inverse what War for the Planet of the Apes got right about the science of chimpanzees as well as the implications of the film, if it were to happen IRL. Humans do threaten chimps in real life, says Atencia, but it’s a very different kind of war.

Here’s a burning question I had throughout the movie: How realistic is that an ape could actually ride a horse?

That’s a loaded question, with a lot of feasibility issues. Horses rarely interact with these species, and so there is not much evidence to go on in terms of how these apes would react to them, or even how the horses would react! What it comes down to is physiology and intelligence. Chimps, gorillas and orangutans all have varying degrees of ability when it comes to learning behavior or problem solving, so it would depend on why they would need to ride the horse in the first place. Then it would depend on how these species are able to move as is required when thinking about riding a horse - things like grip strength, balance, vision, maneuvering, etcetera really come into play, which are very different in these great apes versus in humans.

The bottom line is, it’s very difficult to say. There is no documentation where anything that could initiate this kind of behavior has happened or will happen in the research.

In the movie, apes also communicate to each other by sign language. Does this happen in reality?

Gorillas and chimps have both been documented to be able to learn an extraordinary amount of sign language. For example, a chimpanzee named Washoe learned around 350 signs (her son was the first recorded case of an ape learning sign language from another ape), and Koko, a female western lowland gorilla, learned up to 1,000 signs. They also communicate with both humans and one another of their kind using signs. They have even been observed remixing learned individual signs to make new phrases within their group. In this way, it is also possible that if two apes who had this language tool encountered one another, they could communicate — it just has never really been seen before.

How real are the “war cries” that the chimps shout before they go into battle?

Chimpanzees are very vocal and perform what are considered “displays,” as well as exaggerated movements to both announce attacks, to declare dominance, and/or to claim a territory from other chimps or other species. There are specific calls that include pant-hoots, “waa barks,” pant-screams, and guttural sounds that are intended either to basically say “Don’t mess with me,” “Let’s go!” or as a rally cry to others in a group depending on the situation. Because they live in complex hierarchies and are territorial it is important that they really build up this “bravado” to let others know what is going on and to demonstrate these big movements and sounds as an intimidation tactic.

What do you hope that viewers take away from the Planet of the Apes movies?

I think the amazing computer generated imagery allows to the public to live, suffer, and experience the story from the point of view of a great ape. This can generate empathy toward these amazing living beings. We see the world from our minds, but what would it happen if we are not humans but animals? Sometimes it’s complicated to imagine, but this movie offers us this possibility, which is great.

A strong theme that the humans in War for the Planet of the Apes circulate that intelligent apes and humans can’t live side by side in peace. Is this true?

Chimpanzees already do cohabitate with humans, and other species, in their range across equatorial Africa, which is the only place in the world where they are found. For thousands of years, people lived alongside chimpanzees and other species both in and near forest habitats, living in a balance. At the beginning of the 20th century, there were estimated to be between one and two million chimpanzees in the wild across the African continent, today there are as few as 340,000.

However, a lot of threats are causing their numbers to decline, and it is largely because of human-animal conflict, though not in a true sense of “war.” Human populations continue to grow, and in fact boom, in areas near critical chimpanzee habitat. This causes great pressure on the environment, removing habitat and bringing chimps and humans into greater contact in what are called “forest fragments” that are created between human settlements and developments. For many living in poverty, it is the only available way of life to cut down the forest for illegal logging, to benefit from the illegal bushmeat trade - the hunting of chimpanzees for food, or the illegal wildlife trade, to name a few.

When Dr. Goodall saw the dire situation in these places, particularly in Tanzania where she did her research, she knew that the relationship between humans and chimpanzees could be harmonious if humans both understood the importance of these creatures, and had alternative means of income. That’s what the Jane Goodall Institute does through its holistic approach to conserving this species, it’s about improving the lives of humans and improving this relationship.