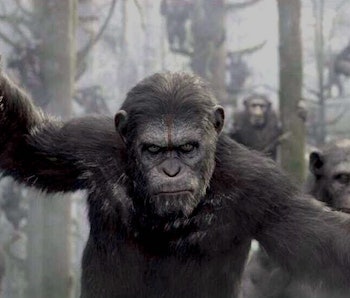 Now that War for the Planet of the Apes has opened to overwhelmingly positive reviews and won its first weekend at the box office, we can now turn to the inevitable next question: What next? Does the story of The Planet of the Apes continue after this installment? And if so, what might that look like? Screenwriter Mark Bomback chatted with Inverse and offered up some answers.

Major Spoilers for War for the Planet of the Apes follow.

If you haven’t seen the latest in the Apes franchise, turn back now, because the conclusion of this film definitely feels final. That’s somewhat incidental; Bomback and Reeves didn’t set out to create a closed circle trilogy when they took over for Amanda Silver and Rick Jaffa, who wrote the initial reboot, Rise of the Planet of the Apes. And yet, Bomback says that when he and Reeves were writing Dawn, things just headed naturally in that direction.

“We felt like there was probably only one more big chapter left to tell, at least of the Caesar mythology,” the writer says. “How Caesar came to be this Moses figure in the Apes world.”

“Truthfully, we haven’t had those kinds of conversations,” Bomback explains. “I’ve been working on these films for about seven years now. I’m ready to take a breather and let things rest a bit.” But that isn’t to say Bomback doesn’t think there couldn’t or shouldn’t be sequels; instead, it’s simply that any version of those stories would probably make a significant leap into the future.

Because the original 1968 film depicted the Earth being ruled by apes in the year 3954, it’s not insane for a direct sequel to War for the Planet of the Apes to jump ahead that far into the future. Could other apes be at war with Caesar’s apes that far into the future? Comments from director Matt Reeves over on ScreenRant seem to indicate that the character of “Bad Ape,” could be a “seed” of what might happen in future movies. Either way, though, Bomback confirms there’s no set plan. “We weren’t trying to lay too much pipe for what was coming next,” he says.

For now, until a sequel comes along, War for the Planet of the Apes will definitely be remembered as the darkest, most serious Apes film of them all. During the screenwriting process, Bomback explains that he and Reeves we aware that the film wasn’t going to pull an monkey-punches. “Truthfully, neither of us interested in making a safe sequel — if there is a safe sequel — to Dawn. We worked really hard on Dawn, and we both agreed if we weren’t going to swing for the fences on this one, it wasn’t worth it.”

War for the Planet of the Apes is out in wide release now.

More like this
Entertainment
6.29.2022 10:30 AM
25 years ago, Nic Cage made his most explosive sci-fi movie ever — it was almost even better
By Jake Kleinman
Culture
6.28.2022 9:00 AM
8 sensational sci-fi shows and movies coming to HBO Max in July 2022
By Robin Bea
Culture
6.25.2022 10:30 AM
You need to watch the most inventive Bruce Willis time-travel movie before it leaves Netflix this week
By Eric Francisco
Related Tags
Share: